YES. Language just like that in HB1510/SB974 has forced open sex-specific bathrooms and showers to those of the opposite biological sex in states and cities across the country. Here’s how:

Some state officials are falsely claiming that HB1510 and SB974 will not affect bathrooms and showers. While those laws don’t specifically use the words “bathrooms” or “showers,” they force them open by requiring that “facilities,” “accommodations,” “privileges,” and “advantages” be provided at public accommodations irrespective of “gender identity” or “sexual orientation.” That’s exactly the language that HB1510/SB974 uses as well. Simply put, these laws apply to locker rooms, restrooms and showers.

Regarding the claim of some that we should only look at the effect of similar language in local Pennsylvania ordinances (rather than nationally), that analysis leads to the same result. For example, Philadelphia’s Human Relations Commission notified employers after passage of their gender identity employment ordinance that they were required to open the bathrooms and showers to employees of the opposite anatomical sex. 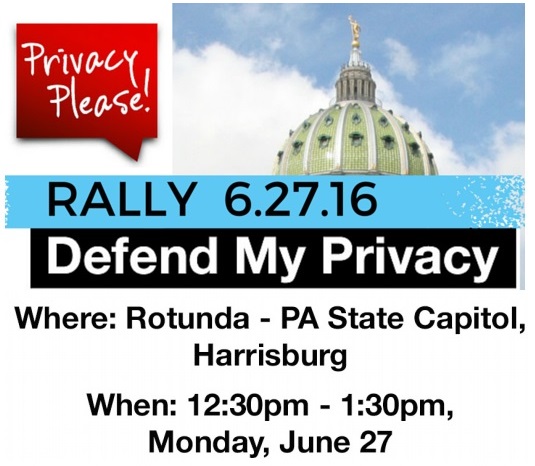 In-Depth Analysis: The following compares the language of Pennsylvania’s proposed law with laws in other jurisdictions. Also, the language from the Philadelphia Human Relations Commission’s guidance document is below.

Compare the proposed language in Pennsylvania with that in some other states and cities that have opened their bathrooms:

“Refuse, withhold from, or deny to any person because of race, color, sex, sexual orientation, gender identity or expression, religious creed, ancestry, national origin or handicap or disability, or to any person due to use of a guide or support animal because of the blindness, deafness or physical handicap of the user or because the user is a handler or trainer of support or guide animals, either directly or indirectly, any of the accommodations, advantages, facilities or privileges of such public accommodation, resort or amusement.”

“It shall be unlawful to deny any person the full and equal enjoyment of the goods, services, facilities, privileges, advantages, and accommodations of a place of public accommodation because of race, color, religion, sex, marital status, familial status, sexual orientation, gender identity, gender expression, or national origin.”

“The right to be free from discrimination because of race, creed, color, national origin, sex, honorably discharged veteran or military status, sexual orientation, or the presence of any sensory, mental, or physical disability or the use of a trained dog guide or service animal by a person with a disability is recognized as and declared to be a civil right. This right shall include, but not be limited to the right to the full enjoyment of any of the accommodations, advantages, facilities, or privileges of any place of public resort, accommodation, assemblage, or amusement;”

“[f]or any public accommodation or any person who is the owner, lessor, lessee, proprietor, operator, manager, superintendent, agent or employee of any place of public accommodation to directly or indirectly refuse, discriminate against or in any manner withhold from or deny the full and equal enjoyment to any person, on account of race or color, sex, sexual orientation, physical or mental disability, religion, ancestry or national origin, any of the accommodations, advantages, facilities, goods, services or privileges of public accommodation, or in any manner discriminate against any person in the price, terms or conditions upon which access to accommodation, advantages, facilities, goods, services and privileges may depend.”

The Maine State Supreme Court, in their ruling to force school districts to permit boys using the girl’s locker room and bathrooms stated that “the Court has concluded, as it must based on the statutes, that discrimination in the public accommodation of communal bathrooms is prohibited based on sexual orientation.”

“It shall be an unlawful discriminatory practice for any person, being the owner, lessee, proprietor, manager, superintendent, agent or employee of any place or provider of public accommodation because of the actual or perceived race, creed, color, national origin, age, gender, disability, marital status, partnership status, sexual orientation or alienage or citizenship status of any person directly or indirectly, to refuse, withhold from or deny to such person any of the accommodations, advantages, facilities or privileges thereof. . . .”

Regarding the suggestion that we look to the effect of municipal law in Pennsylvania, the guidance from Philadelphia’s Commission on Human Relations states that the “ordinance does require, however, that employers permit employees to access those restrooms in accordance with their gender identity, rather than their chromosomal sex.” See page 4, question 4. In answer to the question, “Must transgender employees also be allowed to use gender-identity appropriate locker and shower facilities?” the guidance answers, “Yes.” See page 4, question 5. Could the proposed law in Pennsylvania have the same effect? Compare Pennsylvania’s proposed employment provision with that of Philadelphia, which uses the same key phrase, “terms, conditions or privileges of employment.”

HB1510/SB974 would amend section 5 of the Human Relations Act to read:

It shall be an unlawful discriminatory practice . . .

(a)  For any employer because of the race, color, religious creed, ancestry, age, sex, sexual orientation, gender identity or expression, national origin or non-job related handicap or disability or the use of a guide or support animal because of the blindness, deafness or physical handicap of any individual or independent contractor, . . . to otherwise discriminate against such individual or independent contractor with respect to compensation, hire, tenure, terms, conditions or privileges of employment or contract. . . . Except as otherwise required by law, it is not an unlawful discriminatory practice based on race, color, religious creed, ancestry, age, sexual orientation, gender identity or expression or national origin under this act to fail or refuse to construct new or additional facilities. (Underlines in bill. Bold added.)

Philadelphia, Pa. Ord. § 9-1103(A)(I) states that it is unlawful for “any employer to refuse to . . . discriminate against any person because of . . . gender identity . . . with respect to tenure, promotions, terms, conditions, or privileges of employment or with respect to any matter directly or indirectly related to employment.” (Emphasis added).

HB1510 and SB974 would force sex-specific bathrooms and showers open to the opposite biological sex by requiring that “facilities,” “accommodations,” “privileges,” and “advantages” be provided at public accommodations irrespective of “gender identity” or “sexual orientation.” To stop this from happening across Pennsylvania, contact your State Senator and State Representative to OPPOSE HB1510 and SB974 – Governor Wolf’s Bathroom Bills.