Europe is FAR more advanced on abortion law than America

A growing number of states are updating their laws on elective abortions to permit only up to five months of pregnancy. Some call that extreme – yet not only are medical advancements saving more babies born as young as 22 weeks, but other countries like most of Europe already limit abortion well before 20 weeks.

Here’s an overview, thanks to Prager University, of the differences between America and Europe regarding abortion law:

As highlighted in this video:

Germany: Abortion only up to 12-weeks.

Nearly all abortions are illegal after 12 weeks. There’s a 3-day waiting period and mandatory counseling.

Belgium: Abortion only up to 12-weeks.

Abortion illegal after 12 weeks with the only exception being the mother’s life is in danger. There’s also a 6-day waiting period.

Finland: Abortion only up to 12-weeks.

Abortion illegal after 12 weeks. And to have an abortion the mother must provide a compelling reason to end her pregnancy.

Sweden: Elective abortion only up to 18-weeks, bans most after 22-weeks.

Abortion is unrestricted only up to 18 weeks. And between 18 and 22 weeks, an abortion can only take place if it is approved by the National Board of Health and Welfare.

And in the Netherlands:

A mother has to wait 5 days before an abortion and attend a counseling session; during which she is informed of all her options, including carrying the baby to term and giving the baby to another family through adoption.

Clearly, abortion law is far more advanced in Europe than in America. When babies as young as 22 weeks are able to survive on their own (and majority surviving at 24 weeks), there are still seven states, as well as Washington D.C., that permit abortion at any stage in pregnancy. 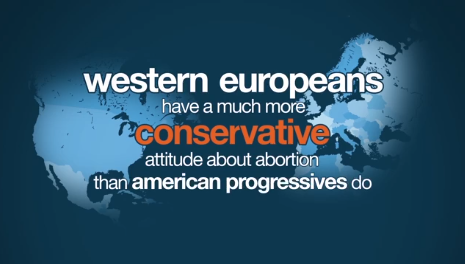