The national pro-life group Susan B. Anthony List (SBA List) and the Pennsylvania Family Council (PFC) just launch a campaign including a web ad and new polling to encourage Senator Robert P. Casey, Jr. to vote to support the Pain-Capable Unborn Child Protection Act (S. 1553), popular legislation to limit abortions after 20 weeks, or 5 months of pregnancy, based on the unborn child’s ability to feel pain. Senate Majority Leader Mitch McConnell has promised a vote on the bill.

“Whether pro-life or pro-choice, Americans should be able to agree that we should limit abortions after five months of pregnancy, when the unborn child can feel excruciating pain,” said SBA List President Marjorie Dannenfelser. “The horrifying investigative videos of Planned Parenthood harvesting the organs of babies after late-term abortions only deepens the need for this legislation. This compassionate, human-centered bill should be bipartisan. Senator Casey has opposed partial birth abortion in the past. We encourage him to vote pro-life once again. Fifty nine percent of his constituents support this legislation – women in higher number than men.”

“Sen. Bob Casey continues to claim the pro-life label, but saying so doesn’t make it so, especially when his voting record reveals the opposite,” said Michael Geer, President of the Pennsylvania Family Council.  “It’s time for Sen. Casey’s actions to mirror his words, and voting for the Pain-Capable bill is a good first step.”

Geer continued: “We call on Senator Casey to return to the principles and values of the man that raised him, the late Gov. Robert P. Casey, a courageous pro-life leader who said, “Abortion is the ultimate violence.”   Indeed.”

From August 25-27, Meeting Street Research conducted a statewide survey of Pennsylvania.  The survey had a sample size of 500 registered voters with a margin of error of plus or minus 4.38%. Highlights from the polling:

Earlier this year, the U.S. House passed the Pain-Capable Unborn Child Protection Act in a bipartisan vote of 242-184. Additionally, 14 state have passed state-based versions of this legislation. National polling by Quinnipiac, National Journal, Huffington Post, NBC/Wall Street Journal, and Washington Post/ABC News all found that a plurality or majority of Americans support limiting abortion after five months and that women support the measure in higher proportions than men. 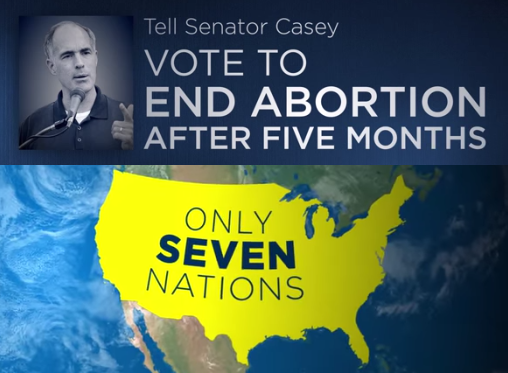