Five Supreme Court Justices – five people – have redefined marriage for an entire nation. Justice Roberts wrote in his dissent that:

Today’s decision, for example, creates serious questions about religious liberty. Many good and decent people oppose same-sex marriage as a tenet of faith, and their freedom to exercise religion is—unlike the right imagined by the majority—actually spelled out in the Constitution.

Well, it has already started: the Editorial Board for PennLive/The Patriot-News of Harrisburg made the following decree in their praise of today’s ruling:

As a result of Friday’s ruling, PennLive/The Patriot-News will no longer accept, nor will it print, op-Eds and letters to the editor in opposition to same-sex marriage.

Believing the best environment for a child to grow up in is with their mother and father is now deemed hate speech by central PA’s newspaper.

The head of the department – John Micek – had this to say on Twitter: 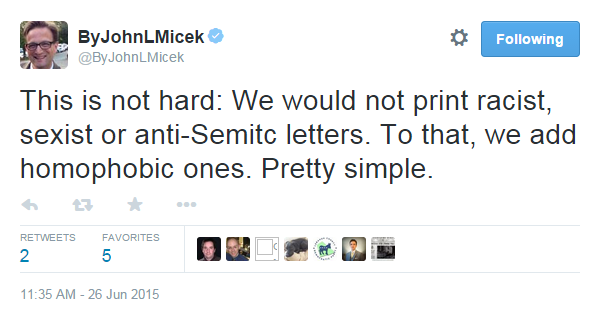 Does this mean that the Patriot News will not publish opinion pieces that highlight the advancements in ultrasound technology and respect to unborn life? Did Roe v. Wade settle the issue of abortion, that now a majority of our generation being pro-life can no longer talk about it in our newspapers?

The freedom to speak out on the benefits of marriage between husband and wife is now facing an all out assault not only by our court systems but by our local newspapers as well.