Four Bills to Watch This Session

One of our event banners describes us well: “We’re watching your state capitol.” Today – January 20th – is the first day of the 2015-2016 legislative session. And we’re already on the Hill, in the halls of power, fulfilling our partnership with YOU to protect the Sanctity of Life, Religious Freedom and Marriage & Family. As our policy team walks the halls and visits offices, here are some highlights of what we’re watching. You’re sure to hear more from us on what you can do at home to help win these battles in the weeks ahead.

To find out more about what this legislation would do and to send a message to your Representative in support of this effort, click here.

2) GOOD RESOLUTION – Led by Rep. Marguerite Quinn (R-143), a resolution is seeking support to recognize January 2015 as “National Human Trafficking Awareness Month.” Public awareness is a key element in battling sex trafficking and this is an example of trying to do just that.

3) BAD BILL – Doctor-Prescribed Suicide: We expect a push for the statewide legalization of doctor-prescribed suicide. We will be there, along with many others, vigorously opposing any push.

4) BAD BILL – HB / SB 300: Representative Dan Frankel (D-23) is reintroducing controversial legislation which would grant special status on the basis of sexual orientation and “gender identity” while making Pennsylvania not at all welcoming to those who believe there’s something special about marriage between one man and one woman.

This exact type of law in other states resulted in:

Click here to send a message to your Representative and Senator and encourage them to stand strong for religious freedom by opposing HB / SB 300.

GOOD SIGN – The Supreme Court of the United States declared on Jan. 16th that it will hear four cases related to state rights on defining marriage. The outcome will either uphold a state’s right to define marriage or declare same-sex marriage legal in all 50 states. With a good ruling, our PA marriage law – redefined by one federal judge to include same-sex couples – could be revisited. A decision is expected this summer, probably in late June.

We will continue to be your watchdog in Harrisburg. Pennsylvania Family Council (PFC) is your voice in the state capitol and provides a platform for informing, inspiring and motivating those who care deeply about the family to greater involvement.

PFC is supported by concerned citizens across Pennsylvania. One way you can be involved is through your financial support. Click here to make a secure online donation today and help us be a watchdog for family values – your values – throughout Pennsylvania. 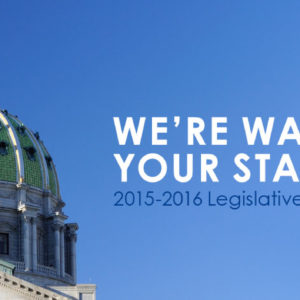