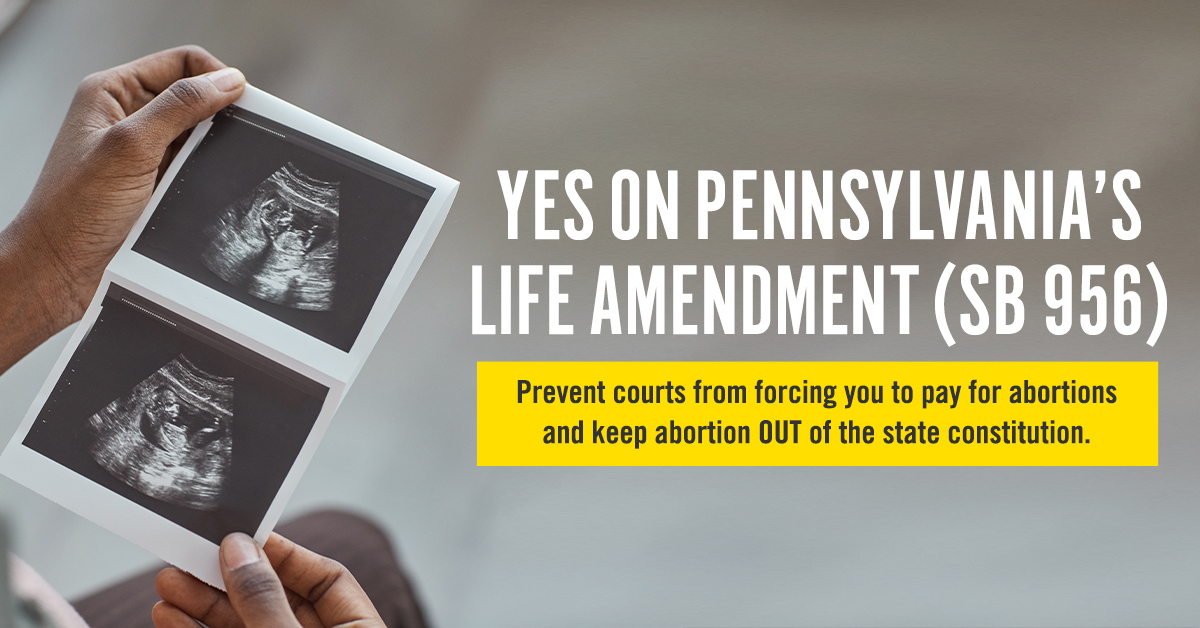 The Life Amendment, Senate Bill 956, would prevent judges from forcing taxpayers to pay for elective abortions.

In a sensible response to this imminent threat, PA State Sen. Judy Ward (R-Blair) introduced Senate Bill 956, a joint resolution for a constitutional amendment to protect Pennsylvanians from seeing their tax dollars used to pay for the taking of a human life through abortion. Today, Senate Bill 956 was passed out of the PA Senate Health Committee by a party-line vote (7 Republican Yes votes to 4 Democrat No votes).

A companion bill has been introduced in the PA House by PA State Rep. Donna Oberlander (R-Clarion). House Bill 2252 is currently co-sponsored by over 60 State Representatives.

“We applaud Senator Ward and Representative Oberlander for introducing the Life Amendment,” says Michael Geer, President of the Pennsylvania Family Institute. “Pennsylvanians, through our elected leaders, have made it clear that no taxpayer should be forced to pay for elective abortions. This constitutional amendment would protect our pro-life laws from an activist court.”

The Pennsylvania Constitution does not contain a right to an abortion or taxpayer funding of abortion, but Pennsylvania’s abortion industry has sued the state in an attempt to invent one. The Commonwealth Court ruled against the abortion industry in Allegheny Reproductive Health Center v Pennsylvania Department of Human Services, but it is now before the Supreme Court of Pennsylvania on appeal. Court watchers believe it’s likely that our state’s high court will invent such a right, siding with the abortion industry’s demands. This activist ruling would not only force taxpayers to fund abortion but it would put into jeopardy every current pro-life protection, including the 24-hour waiting period, informed consent, 24-week abortion limit, and safety regulations to protect women that were put into place after Kermit Gosnell’s “House of Horrors” was uncovered in West Philadelphia.

Pennsylvania citizens have consistently supported laws that prevent taxpayers from being forced into paying for abortions. The longstanding Pennsylvania Abortion Control Act of 1989 prohibits taxpayer funding of abortions (with a few exceptions). In 2013, the PA General Assembly reiterated this support by passing into law House Bill 818, which prohibited taxdollars from subsidizing abortions in the Obamacare health insurance exchanges. Representative Oberlander said at the time, “If we as a Commonwealth are going to succeed in safeguarding the gift of human life, Pennsylvania must do everything possible to preserve current law by prohibiting the existence of taxpayer-funded earmarks” for elective abortions.

Pennsylvania’s Life Amendment must pass both the PA House and Senate by simple majorities in two successive terms of the legislature before it would go to a vote of the people at the ballot box. A constitutional amendment like this one does not need a governor’s signature and cannot be vetoed.

“Despite the abortion industry’s mischaracterizations of this bill, the Life Amendment would prevent abortion from being enshrined in our constitution,” says Janice Martino-Gottshall, Senior Counsel for Independence Law Center. “What this bill would do is prevent courts from forcing taxpayers to pay for abortion, protect our existing pro-life state regulations and allow our duly-elected legislature to enact future laws to protect women and preborn babies.”

Allegheny Reproductive Health Center, the main party representing Pennsylvania’s abortion industry, failed its most recent state health inspection as well as failed a building inspection in 2021; all while profiting from thousands of abortions.

Take Action: Contact your State Senator, and State Representative, in support of the Life Amendment. Click here to use our action alert to send an email in support.