Today, the first legislative step was taken in the Down Syndrome Protection Act – House Bill 2050 – with a passing vote out of the PA House Health Committee (17-9 bipartisan vote – see roll call below) chaired by State Representative Kathy Rapp. House Bill 2050 could come up on the House floor for debate as early as this Wednesday.

Here’s a few highlighted statements from the committee hearing in support of the Down Syndrome Protection Act:

“Who are we to be able to say individuals should be aborted on the basis of Down syndrome?”

– State Representative Mike Turzai, one of the prime sponsors of the Down Syndrome Protection Act

“This is about putting forward public policy that makes a larger cultural statement.”

– State Representative Jim Cox, who mentioned how the greater cost without this legislation is the cost of not having individuals with Down syndrome in our society.

And then there were comments like these in opposition to this legislation:

“This is state-imposed continuation of pregnancy. Not really sure why we’re even talking about this.”

This is a prime example of the extreme viewpoints aligned with Planned Parenthood that want abortion without restriction. And of note, current law already says a woman cannot have an abortion for the sole reason of the sex of the unborn child. This simply adds to that exception. No woman is forced to continue a pregnancy through this legislation.

“This legislation won’t do a thing to the quality of life who live in this state.”

Allowing children with Down syndrome a chance at life is certainly improving their quality of life. And they enrich the lives of so many others. You would certainly hear the same from the families of Aiken, Michael, Mary, Chloe or the many children and individuals with Down syndrome advocating for the Down Syndrome Protection Act. See their stories: pafamily.org/alifeworthliving 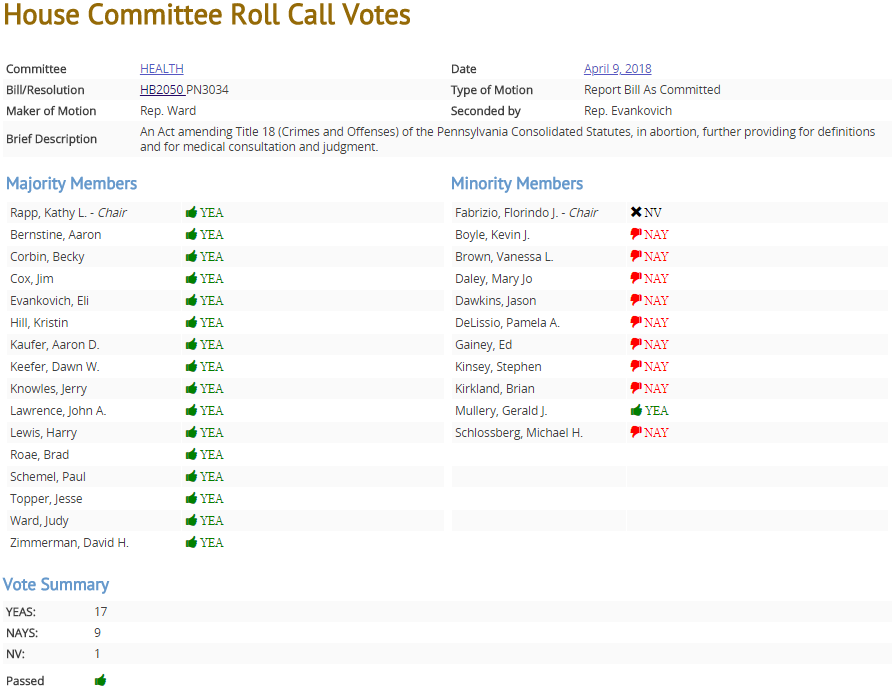 The Down Syndrome Protection Act now moves to the full PA House of Representatives for consideration, which may happen as early as this Wednesday.

Here are three ways you can show support:

2. Utilize our online resources to educate and share with others.

House Bill 2050 – “No abortion shall be deemed necessary if sought exclusively for either or both of the following reasons: (i) The sex of the unborn child. (ii) A prenatal diagnosis of, or belief that the unborn child has, Down syndrome.”

3. Write a letter to the editor of your newspaper.