Pennsylvania Family Institute supports this vote and the hundreds of lives it would save each year.

HARRISBURG, Pa. – After nearly 30 years, Pennsylvania’s abortion laws would finally be updated thanks to today’s 121-70 vote by the PA House of Representatives in favor of Senate Bill 3, legislation that would end both late-term and dismemberment abortion. 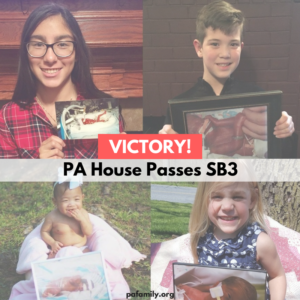 “Modern medicine has advanced greatly since the Commonwealth set up its abortion law back in 1989,” says Tom Shaheen, Vice President for Policy of Pennsylvania Family Institute. “Back then, children born at 24 weeks or earlier would most likely not survive. Today, the majority of children born at 24 weeks – like Emma from York and Will from Pittsburgh – survive. That’s exactly why Pennsylvania needs Senate Bill 3.”

Today, there are children born as early as 21 weeks that survive and thrive. Pennsylvania law currently permits abortion as far as 24 weeks – six months – in pregnancy. According to the PA Department of Health, over three hundred abortions happen after 20 weeks every year, one-percent of total abortions.

Senate Bill 3 would also ban the practice of dismemberment abortion. “It’s hard for me to comprehend children being intentionally ripped apart – literally – in the womb while our finest Children’s Hospitals are providing anesthesia and life-saving surgeries to babies in the womb,” says Randall Wenger, Chief Counsel of Pennsylvania Family Institute.

The State Senate voted to pass SB3 back in February. Sadly, Governor Tom Wolf has expressed his decision to veto Senate Bill 3. “Governor Wolf is putting his extreme abortion views on full display,” says Shaheen. “Not only is he disagreeing with this sensible legislation but he has been campaigning for Pennsylvania’s leading abortion business – Planned Parenthood – a group that opposes any sensible updates to abortion limits. While Planned Parenthood is spending record amounts of political money on behalf of Governor Wolf, he is touring their abortion businesses and hosting panel discussions in their favor. It’s a shame that’s the case for Pennsylvania families.”