Tuesday, December 5th starting at 10am, the U.S. Supreme Court will hear oral arguments in the Masterpiece Cakeshop v. Colorado Civil Rights Commission case. As you know, this case centers around whether the state of Colorado can penalize cake baker Jack Phillips for declining to participate in a same-sex wedding. Jack is a Christian, and while he sold countless cakes to LGBT people, he simply didn’t want to take part in an event that violated his Christian beliefs.

Here are a few prayer points for Tuesday:

Praise God for Jack’s humble heart, and willingness to stand up for his faith. Pray this spirit of boldness sweeps across the nation.

Kristen is Senior Vice President of US Legal Advocacy & General Counsel for Alliance Defending Freedom (ADF) and will be arguing the case in court. Kristen is brilliant and I am so grateful that she is using her God-given gifts to advocate for Constitutional freedoms. Pray the words that flow from Kristen are directly from the Holy Spirit.

Pray for the gay couple who brought the claim against Jack

Ask the Lord to work in their heart, to protect them and to draw them near to Him.

In Jesus name, pray that these Justices uphold our First Amendment religious freedoms to live according to our faith:

It is no overstatement to say that this case will decide the future of religious freedom for generations to come. Pray the Lord has mercy on America and shows ADF, Jack, and our nation great favor. Petition our Heavenly Father to grant Jack and ADF victory! 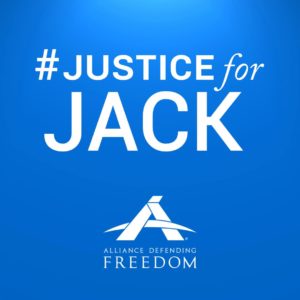