So, how did Planned Parenthood repay us with this “investment”?

3. They shut down facilities.

In 2016 alone, five facilities have been closed. That’s a total of nine center closings since 2013:

These closed facilities did not perform abortion surgery (only made abortion referrals), but focused on the services politicians like to tout when sending our tax dollars to Planned Parenthood.

Even though Planned Parenthood has seen a drop in patients and basic health care services, the number of abortions they perform continues to increase. All while the abortion totals statewide have steadily declined. In 2015, they performed over 600 more abortions than the previous year, totaling well over 17,000; over half the state total.

FACT: Planned Parenthood has a growing market share of abortion in Pennsylvania.

5. They spent millions on lawsuits, lobbying and elections.

It was reported that Planned Parenthood was spending $1.3 million on an ad buy against the reelection of US Senator Pat Toomey. Nationally, Planned Parenthood’s leaders boasted that they were spending over $30 million in the 2016 elections, with a main target being Pennsylvania, to try to elect pro-abortion candidates and defeat good pro-life candidates.

Planned Parenthood lawyers and lobbyists are always out in force opposing any reasonable proposals or laws that would protect women and babies from the harmful results of abortion. 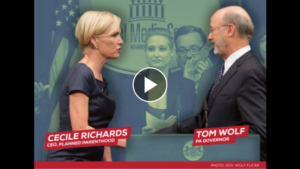