Just introduced in the Pennsylvania State Senate is legislation to limit abortion to five months of pregnancy and thus ending late-term abortions. SB 888, similar to effort in the House with HB1948, would also send the barbaric late-term practice of dismemberment abortion – also know as Dilation & Evacuation.

To send an email: click here or go to tinyurl.com/endlateterm

Nineteen state legislatures have already placed limits on abortion past five months in pregnancy. Additionally, nine states, including Pennsylvania, are considering such limit.

Six states have passed laws to end D&E, or dismemberment abortions; a barbaric procedure used in 23% of second-trimester abortions in Pennsylvania (down 55% since 2010).

In Pennsylvania, abortions are permitted as far into a pregnancy as 24 weeks and 6 days. At this stage a baby would likely survive on their own. This limit became law in 1989, at a time when doctors typically did not treat a baby born before 23-24 weeks because of the slim chance of survival. Thanks to medical advancements, premature babies are now surviving at record rates, premature babies like Lydia and Will, two children who were born prematurely and are now thriving! 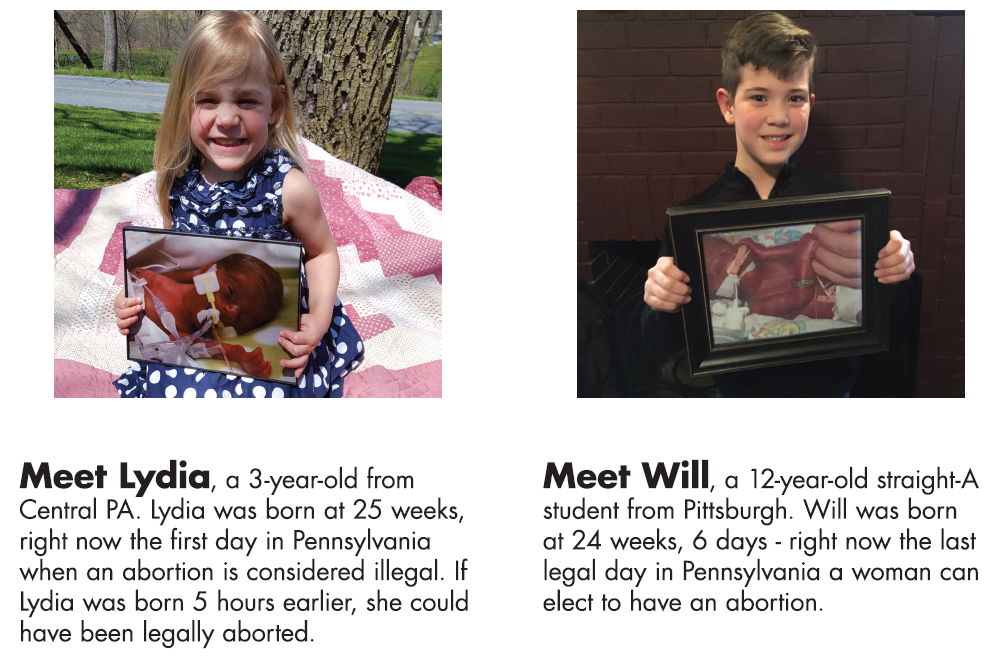 1. The United States is one of only seven nations that allow elective late-term abortion past five months of pregnancy. Only North Korea, China, Vietnam, Singapore, Netherlands, Canada and the USA.

3. There is a significant increase in complications and mortality with women who have abortion at higher gestations; especially past 20 weeks.

4. The use of the barbaric D&E procedure is already down 55% in Pennsylvania since 2010 and carries significant risk to the health of the mother.

5. Babies born as early as 22 weeks are surviving on their own and at record rates.

Show compassion for life and end late-term and dismemberment abortions in Pennsylvania.