Is it fair to force a Muslim truck driver to violate his beliefs? 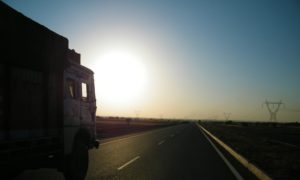 In 2013, two truck drivers – Mahad Abass Mohamed and Abdikarim Hassan Bulshale – were fired from their position with an Illinois-based trucking company. They were fired because they refused to deliver alcohol – something that violated their religious beliefs.

A lawsuit was filed by the U.S. Equal Employment Opportunity Commission (EEOC) because the company didn’t provide the two men “with a reasonable accommodation and by terminating them because of their religion.”

In October 2015, a jury found the trucking company in violation of religious discrimination and awarded the two men $240,000.

The reason is because some states are passing a special status for “sexual orientation” and “gender identity” into law that is being interpreted to force bakers to participate in same-sex wedding ceremonies, even if it violates their faith or conscience.

If Pennsylvania were to pass the proposed so-called “Fairness Act” we would join those states and force those in the wedding industry – as well as other businesses and public and private schools – to act contrary to their beliefs or suffer the consequences.  Please contact your state representative and senator and ask them to oppose HB 1510 / SB 974.