Grandmas, Good People Show Us Why “Fairness Act” is Unfair

Some state lawmakers are pushing a bill that would create a new target for discrimination here in Pennsylvania against those who exercise their personal or religious freedom.

The so-called “Fairness” Act (SB 974 & HB 1510) would create special privileges for some based on sexual orientation or “gender identity” while making criminals out of those who believe there’s something special about marriage between one man and one woman.

This legislation is similar to what some other states have passed into law and the result has been a slew of lawsuits and fines and the loss of fundamental freedoms.

The following lists out individuals, businesses and schools that have lost freedoms as a result of their state passing a law like the so-called “Fairness” Act; as well as examples in PA of who would be at risk should it pass:

National cases – the common thread in these stories is an “anti-discrimination” law/policy just like what some are now pushing in PA:

1. Barronelle Stutzman – Washington State: Sued for refusing to provide flowers for the same-sex ceremony of a longtime customer of hers. She could lose both her business and her home if she’s found guilty. Watch her exclusive interview:

2. Aaron and Melissa Klein – Oregon: Found guilty of violating the state’s public accommodation law for declining to bake a cake for a same-sex wedding ceremony. The judge determined a $135,000 fine after the customers who filed the complaint listed over 80 grounds for compensation, including “excessive sleep,” “resumption of smoking habit” and “dislike of going to work.” None of these were certified by a doctor, psychologist or through expert testimony. Their bakery – Sweet Cakes by Melissa – was closed in September 2013 due to the lack of wedding business and threats against them and their income is now half of what it was when the bakery was open.

3. Jack Phillips – Colorado: A baker for 40 years, the court ruled he discriminated against a same-sex couple for refusing to make a cake for their ceremony and now faces fines and/or jail time. His initial appeal was denied. He no longer makes wedding cakes.

4. Pam Regentin – Oregon: She could not provide a wedding cake for a same-sex couple – “I believe I have the liberty to live by my principles.” Regentin runs her business from her home and despite multiple threats from others, the couple has decided not to pursue legal action.

5. David and Lily Stockton – Indiana: Settled over a complaint of discrimination for refusing to create rainbow cookies and a cake for a “coming out” celebration.

6. Robert and Cynthia Gifford – New York: Fined $13,000 by the state for refusing to host a same-sex ceremony on their home property. Hear their story here:

7. Jim & Mary O’Reilly – Vermont: An employee mistakenly informed a same-sex couple that they could not host their wedding reception. Even though this was incorrect, they settled with the state – paying $10,000 in fines, an additional $20,000 into a charitable trust and vowed never to host any wedding receptions again.

8. Jim & Beth Walder – Illinois: Sued for stating their future intentions to not host a same-sex ceremony.

9. All Occasion Party Place – Texas: Told a same-sex couple that they could not host their ceremony. They do not face legal action because it resides in a city and state without a SB 300-type ordinance.

10. Pastor Donald and Evelyn Knapp – Idaho: A complaint was filed demanding that they perform same-sex wedding ceremonies in their Chapel. The city backtracked by sending a letter stating the couple runs a non-profit entity that would be exempt from the ordinance. The chapel is actually a for-profit business. Alliance Defending Freedom (ADF), on behalf of the couple, filed a lawsuit against the city demanding that they clarify the ordinance. That suit is now in the U.S. District Court.

11. Ocean Grove Camp Meeting Association – New Jersey: Court ruled against this Christian ocean retreat for refusing to allow a same-sex ceremony to be conducted on their property. The Association has stopped renting out their pavilion for weddings.

12. Elaine Huguenin – New Mexico: Chose not to photograph a same-sex ceremony and court ordered her to pay $6,637.34 – citing that giving up your religious freedom is the “cost of citizenship.”

13. Donna Saber – New Jersey: She refused to provide a wedding dress to a same-sex couple and received multiple threats upon her business. No legal action has been taken.

14. Blaine Adamson – Kentucky: Arranged with another local company to fulfill a t-shirt order request at the same cost for a Gay Pride Festival. He was sued and told that his employees must go through “diversity training.” In October 2014, he was found guilty of discrimination. Adamson appealed the decision and the court ruled in favor of Adamson; saying he is free to decline to print messages that conflict with his religious beliefs and the government cannot force him to do otherwise.

Hands On Originals VNR from ADF Media Relations on Vimeo.

16. Catholic Charities – Illinois: Forced to shut down their adoption agencies because they could not conform their beliefs. An estimated 2,000 children had to transition to other agencies. Adoption agencies in Massachusetts and Washington, DC were also shut down.

17. Evergreen State College – Washington State: Forced to permit a 45-year-old transgender man (who identifies as a woman) to use a women’s locker room that is used by a local youth swim team with girls as young as 6 years old. College spokeswoman: “Gender identity is one of the protected things in discrimination law in this state.”

18. Eagleside Elementary – Colorado: Court orders that a 6-year-old boy who identifies as a girl must be permitted to use the girls restroom at his school.

19. Asa Adams School – Maine: School sued for permitting a 5th grade transgender boy (who identifies as a girl) to use a staff restroom, but not the girls room. Court ruled against the school. They were fined $75,000 and forced to allow the boy to use the girls’ facilities.

20. Denny’s Restaurant – Maine: One franchisee refused to let a man who dressed and identified as a woman to use the women’s restroom.  They settled the case, agreeing that “all transgender individuals…will have access to the restroom consistent with their stated gender identity.”

21. Fontbonne Academy – Massachusetts: Catholic school refused to hire a teacher in a same-sex marriage. Headmaster: “[G]uided by the religious doctrines and beliefs of the Roman Catholic Church [which] has a very specific belief that marriage between two persons of the same-sex is contrary to the teachings of the Catholic Church and that belief informs policies of how Fontbonne Academy and all Catholic schools are to operate on this issue.” The teacher has filed a lawsuit.

22. California Baptist University – California: A student was expelled from the University after it was discovered he was born a male but designated himself as a female on his admissions application. The student sued the private, Christian, liberal arts university in Riverside, California, and alleges that the school is violating the state’s discrimination law.

23. Christian Fellowship, Bowdoin College – California: Forced to meet off-campus and not recognized by the college as a group for refusing to sign a non-discrimination policy. “It would compromise our ability to be who we are as Christians if we can’t hold our leaders to some sort of doctrinal standard.” By not signing, the group is not eligible for funding from student government and cannot use such facilities as the college chapel.

“Shoe on the other foot” – a few stories where legal action could have been taken if they had something like HB/SB 300:

24. Alliance Defending Freedom – A photographer was asked to take staff photos. He declined citing personal beliefs contrary to the organization.

25. New Mexico Governor Susana Martinez – Antonio Darden denied a haircut to the Governor specifically because the Governor believed marriage as the union of husband and wife.

Pennsylvania cases – here are just a few examples of what the attacks would look like in our state if SB 300/HB 300 is passed:

26. Lorraine Fleming – She’s a cake baker from Schuylkill Haven who declined to make a cake for a same-sex wedding ceremony.

27. Victoria Miller – She owns a wedding dress boutique in Bloomsburg and could not provide a dress for a same-sex ceremony.

28. Holy Ghost Preparatory School – This Catholic school requires all faculty and staff to follow the teachings of the Church as a condition of their employment. When a teacher publicly declared he was marrying his same-sex partner, the school was forced to let him go. State Senator Daylin Leach said in response that if the discrimination law was changed, it would be illegal for Pennsylvania private schools to fire faculty that do not follow what the school believes in.

And our legal team already has heard from many who run businesses and ministries who are at risk with the so-called “Fairness” Act:

We have been contacted by those involved in over a dozen fields in Pennsylvania: Christian camps, private high-schools, colleges, churches, photographers, owners of a Bed & Breakfast, a bridal shop, a musician, a florist, multiple bakers, foster and adoption agencies and various ministries. The freedoms of those involved in each of these fields are at risk if the so-called “Fairness” Act is passed.

The so-called “Fairness” Act is unnecessary and dangerous public policy. If this legislation passes, our churches, schools, and ministries will lose their ability to hire those who live according to church teaching on human sexuality. And those involved in the wedding industry can be punished for refusing to do a same-sex wedding. If we don’t stop this, we will lose our liberty to live according to our faith.

We encourage you to contact your State Senator and State Representative – tell them to oppose the so-called “Fairness” Act – No on SB 974/HB 1510. 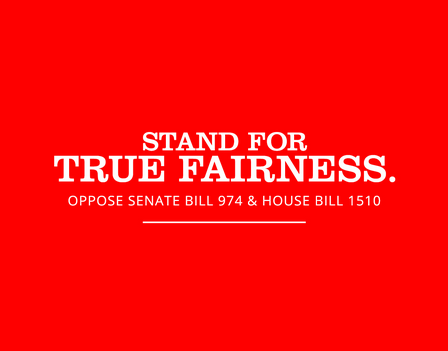