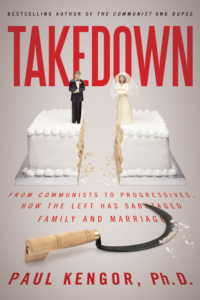 The following Q&A is an exclusive interview with Professor Paul Kengor on his new book, Takedown: From Communists to Progressives, How the Left Has Sabotaged Family and Marriage, and his views of the recent Supreme Court ruling on same-sex marriage. Interview performed by Pennsylvania Family Institute’s Brooke Dymski.

Dr. Kengor, what effect will the Supreme Court’s ruling on same-sex marriage have on the next generation?

The impact will be extremely significant. With the court magically declaring same-sex marriage a “constitutional right” in all 50 states, the next generation of young people will be raised in public schools and especially universities that indoctrinate them into thinking that same-sex marriage is now legal hallowed ground. Support for same-sex marriage had already been birthed in our universities. Ask anyone where this cultural juggernaut started rolling, and they will tell you that it began in our nation’s horribly biased and ideologically one-sided universities—the ones that preach “tolerance” and “diversity” but, in fact, only tolerate “diverse” viewpoints that they agree with. That, of course, is not tolerance.

To dig much deeper into this, I urge people to read the chapters in Takedown that focus on John Dewey, Columbia Teachers College, Herbert Marcuse, the 1960s New Left, cultural Marxism, the Frankfurt School, and the universities. It’s a stunning tale. In particular, read the section on Marcuse’s notion of “repressive tolerance,” where he argued that secular progressives in the universities should tolerate only their own ideas on the political left, and should not tolerate ideas from the “right.” And what is the “right?” That’s the kicker: Amazingly, if you today support the natural, traditional, biblical, Judeo-Christian, multi-millennial, Western, two-thousand-year-plus standard of male-female marriage, you now find yourself placed on the “right” and relegated to a lower form of humanity whose position on marriage will not be tolerated by the forces of “tolerance.” How’s that for “diversity?” Welcome to the New America.

Would you agree that this could create a constitutional crisis placing our freedoms of religion and speech against the new marriage equality right?

Absolutely. Groups like the ACLU, which have never enjoyed protecting our first freedom in the First Amendment to the U.S. Constitution—that is, freedom of religion—now have an amplified rationale for further ignoring religion and, in effect, hammering it into submission. In Takedown, I note that same-sex marriage is a gift for the far left in that it allows the left not only to redefine and reshape and even take down the natural-tradition-biblical family, but in that it allows the extreme left to do what it has always enjoyed the most: attack and undermine religion and religious believers.

It’s funny, Justice Anthony Kennedy thinks that his ruling on same-sex marriage has fostered peace and love—“Love Wins”—when, in reality, he has fostered a painful and protracted battle for religious believers in America. It’s the forces of anti-religion that will really win. They are the biggest victors in the June 26, 2015 marriage decision.

What are the implications for a church/pastor that would refuse to hold such a marriage?

In the short-term, there will be demonization of churches/pastors by the forces of “tolerance” and “diversity.” In the long-term, there’s much worse in store, especially as Anthony Kennedy and the four liberal justices have just magically discovered a constitutional right to same-sex marriage in all 50 states. If you want an example of the persecution to come, look at the fines, the silencing, the picketing, the shutting down, and the all-around destruction and demonization of bakers, florists, and photographers who refuse to service a same-sex wedding ceremony because gay marriage violates their sacred religious beliefs. All of that was happening prior to same-sex marriage being declared a “constitutional right.” With this new form of civil “marriage” now being a “constitutional right,” those attacks will go into hyper-speed with a special vengeance and contempt by the left—albeit in the name of “love,” of course.

What parallels do you see with the Roe v. Wade abortion decision and its aftermath?

I think the parallels are actually quite remarkable. Once again, you have a Supreme Court majority discovering a “constitutional right” in the Constitution that doesn’t actually exist and then, in turn—presto! bingo! shazam!— imposing it upon all 50 states in defiance of the will of voters in those states. Once again here, we see that the left’s incessant talk of “democracy” is nonsense, yet another slogan for exploitation. The one big difference between this ruling and Roe v. Wade is that this one is even more of a constitutional abomination. The justices who supported the majority decision on Roe v. Wade at least had the audacity to try to read into the Constitution a “right” to an abortion within a “right to privacy” that (likewise) was non-existent in the Constitution, albeit projected somehow by certain mystical “penumbras” and “shadows” in the Constitution. And the Roe gang did that in direct defiance of two literal references in the Constitution to the “right to life.” The same-sex-marriage majority decision doesn’t even try to do that.

Really, if you want to understand what Justice Kennedy did in his decision, simply look at his reasoning in the 1992 Planned Parenthood v. Casey decision that reaffirmed Roe. Kennedy wrote then: “At the heart of liberty is the right to define one’s own concept of existence, of meaning, of the universe, and of the mystery of human life.”

Chew that one over. That explains Kennedy’s willingness to redefine marriage. If Anthony Kennedy interprets liberty in America to mean that every American possesses his or her own right to define one’s own singular concept of existence, meaning, the universe, and life itself, then why can’t Americans come up with their definitions of marriage? Really, redefining marriage is small potatoes after all that.

As for the aftermath, the lessons from Roe, I think, are crucial. We need to focus less on trying to overturn this ruling at the constitutional level than making the case for why 99.99% of people who have ever bestrode the planet understood that marriage is between a man and a woman. Human beings have always, understood that the best situation for children, a culture, and a society is one of intact families anchored by faithful moms and dads. We will need to set up private marriage organizations to make that case as we’ve been doing for over 40 years on abortion. Pastors and priests will need to play a vital role in that.

Sadly, however, making the case for marriage will be very difficult in the face of the forces of “tolerance” and “diversity” as they denounce, debase, dehumanize, demonize, and seek to destroy those who dare remain loyal to the teachings of God, nature, our faith, and our ancestors.

We have a very difficult road ahead. The U.S. Supreme Court has not simply expanded “marriage rights” to a new group of people. It has given a hammer to enemies of the family, of marriage, and of religion. And those foes intend to use it with great force.

Dr. Paul Kengor is a New York Times best-selling author and professor of political science at Grove City College. Kengor is a frequent contributor to MSNBC, C-SPAN, NPR, PCN-TV, EWTN, and FoxNewsChannel, and is a regular columnist for Townhall and the American Spectator.