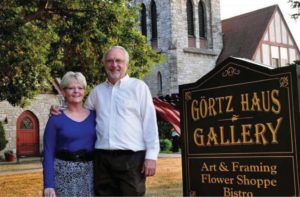 Sadly, there is another example of why we need to fight here in PA against laws that put good people out of business: Richard and Betty Odgaard had owned Görtz Haus Gallery in Grimes, Iowa since 2002. They purchased an old church building and transformed it into a small business that offered a variety of options – a bistro, art gallery, flower shop and wedding venue.

On August 3, 2013, a gay couple wanted to rent the Gallery for their wedding ceremony. Because of their Mennonite faith, the Odgaards told the couple they could not host their wedding. Within 24 hours, the couple filed a discrimination complaint through the Iowa Civil Rights Commission – pointing to their state’s anti-discrimination law that has placed “sexual orientation” and “gender identity” as protected classes (something Pennsylvania does not have – and for good reason).

They settled with the couple – paying $5,000 as well as returning two non-refundable deposits to other couples and ended their wedding business.

“We had to get rid of the wedding business to avoid another complaint and possibly a higher penalty.” – Richard Odgaard

“We didn’t have a choice. We would be targets.” – Betty Odgaard

Their story hasn’t been heard like the Giffords in New York or the Kleins in Oregon or like Barronelle Stutzman in Washington – mainly due to the 18-month legal battle that prevented the Odgaards from speaking out.

But now, the Odgaard family has announced that at the end of August, they will completely close their business.

This is yet again a reminder of the harm that results from laws that create special privileges for some based on “sexual orientation” or “gender identity” while making criminals out of those who believe there’s something special about marriage between one man and one woman.

Pennsylvania does not have this statewide law but some lawmakers plan on introducing a proposal for one soon. Stay tuned for more from the Pennsylvania Family Institute – to be alerted about this legislation you can sign-up for e-alerts here.