Over the last few months the staff at Pennsylvania Family Council was busy planning for Life Action Day. We knew there was excitement for rallying in the Rotunda on this critical issue and sure enough we were greeted with a wave of support.

It was amazing to see hundreds of supporters gather; coming from all over the state – from Carlisle and Lancaster (including a bus full!) to Philadelphia, Pittsburgh – even Punxsutawney (“we started driving while it was still dark out.”). It was simply awesome to have so many from across Pennsylvania dedicated to being a part of this first-ever event.

The speakers at the rally provided a great representation of pro-life Pennsylvania advocates. Here are some highlights from each speaker:

Another point was about the absence of adoption referrals from Planned Parenthood’s state annual reports. Bomberger, himself adopted into a family of 15, stated, “It’s obvious which choice they are pointing women to.” (Adoption is referenced zero times in their annual reports compared to 17 references to abortion.)

Too often women are “making the most important decision of her life and she’s all by herself.” She emphasized the importance of men being involved: “Men are excluded from this conversation. Men are told to sit down, shut up and pay….Men are a vital role in this decision.”

Scheuring also highlighted the fact that in looking over prenatal services for Planned Parenthood, 94% of the services are for abortion. “That’s not choice. That’s one choice.”

Adams told a story about when she recently called a local Planned Parenthood and asked about what counseling they offer for a woman facing an unplanned pregnancy – “What can I do?” She was put on hold – her impression was that the idea of counseling was confusing to them – and finally told she could watch a video on the types of abortion procedures. That was it. “If that is the type of care they are receiving at Planned Parenthood, it breaks my heart.”

When asked how she would talk with women coming in for an abortion, she was quick to state that she would not ask why they were there. “We do not ask what brought you in today. That’s passing judgment.”

Also, after watching a video showing statistics about abortion in PA, she was asked for her reaction and simply said she needed a moment because she was crying. It brought to mind the reality of confronting 32,000 abortions every year or the profits made by the largest abortion provider – it should be emotional and stir us to do something about it. 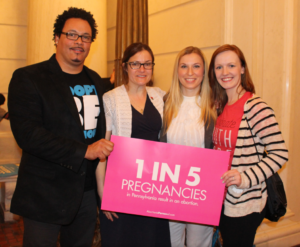 After the rally, our newly released State of Abortion in Pennsylvania report was delivered to every member of the General Assembly. And the feedback we’ve received on the report has been humbling: “Ground-breaking”…”Brilliant report”… “A much-needed resource for Pennsylvanians.”

If you haven’t seen it yet, you can download it for free at AbortionisPersonal.org.

And the feedback after the rally was very positive. “Wonderful rally – so important!” – “The turnout was wonderful and the presentation and materials were very well done.” – “Such a success – thank you!”

Finally, we wanted to point out that the rally concluded with a call for four action items:

At Pennsylvania Family Council, our goal from the beginning of this effort has been more than just one day of action. We want to continue educating Pennsylvanians and improving the conditions surrounding the women and families considering abortion. We encourage you to contact your State Senator and Representative about redirecting taxpayer money from Planned Parenthood – you can send an email using our Citizen Action Center. And we encourage you to read and share our ground-breaking report: download it for free at AbortionisPersonal.org.

Thank you to all who were a part of the first-ever Life Action Day. And thank you to everyone taking part in advancing the conversation for the protection of life in Pennsylvania.