Why this legislative session could not have started any better

Here are two observations from today’s ceremony for the House of Representatives opening session for the 199th time:

Pastor – “May they lead their homes well.”

The first action after Speaker of the House Mike Turzai was sworn into office could not have been better.

After Speaker Turzai took his oath, Pastor Mel Masengale of Indiana Summit Church in Indiana, PA offered a prayer. And it was so spot on and refreshing to hear.

He asked for God to grant divine wisdom to the elected officials. He especially asked for aid in leading their homes well. That their “families would be shielded from the dark side of what politics can be.” He specifically prayed for Speaker Turzai’s family, his wife and three sons.

We should all remember that elected officials are people who have families just like you do and they need our prayers.

Pastor Masengale prayed for wisdom to believe in new things for Pennsylvania; believing in the best for our families. He prayed these things for the glory of God in the name of Jesus. And I thank him for his prayer – one I hope many will echo throughout the coming year.

Seven words some would wish not be repeated

One phrase was repeated during the ceremony that some unfortunately would wish never be said in the halls of government. It was said right before the elected officials took an oath of office: “Place your left hand on the Bible.” 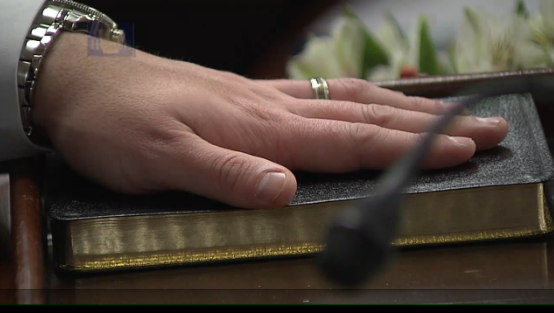 A picture from today’s hearing during the oath of office.

Every elected official was directed to do so. Some may have chosen not to but all were asked to – as it should be.

That’s because our government is rooted in a rich religious history. It’s because the very oath that every official is required to repeat states to support, obey and defend the Constitution. Our Pennsylvania Constitution starts by stating we are “grateful to Almighty God for the blessings of civil and religious liberty” and asks to humbly invoke His guidance.

The beautiful Pennsylvania State Capitol building is filled with references to the Bible and our religious history. Just looking in the House Chamber you will see Deuteronomy 32:7:

“Remember the days of old, consider the years of many generations: ask thy father; and he will show thee; thy elders, and they will tell thee.”

May we continue to pray that our elected officials will invoke the guidance of God in their elected duties.