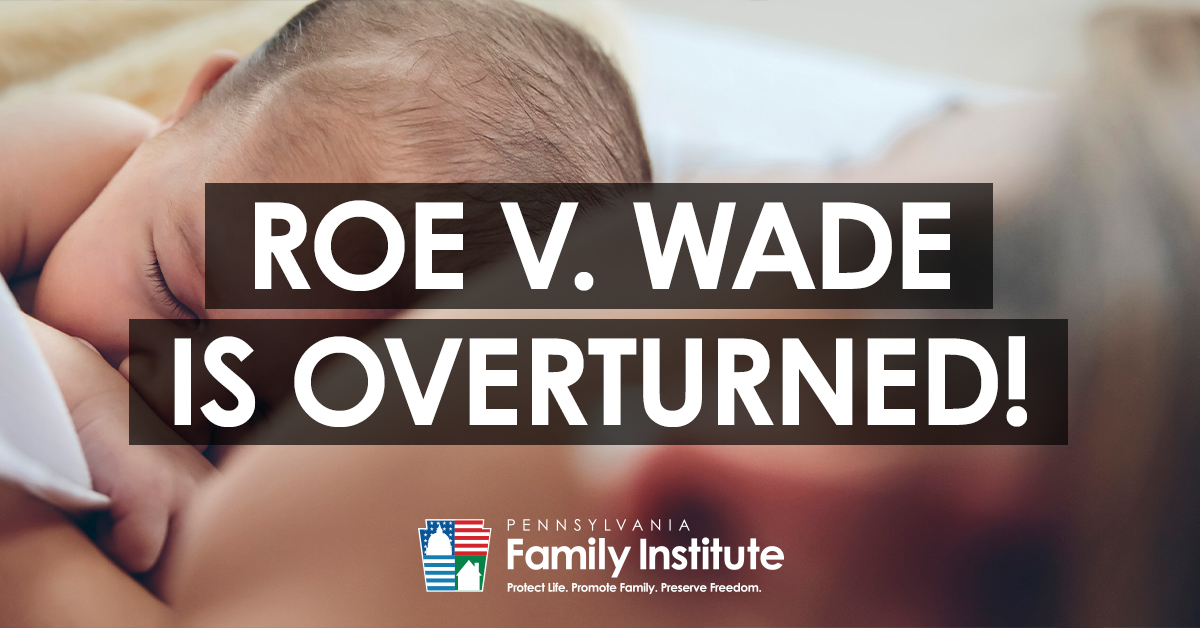 States like PA are now empowered to fully protect unborn life with the overturn of both the Roe and Casey decisions.

“Today we celebrate the overturning of Roe v Wade, a monumental victory for unborn children and their mothers,” says retired Judge Cheryl Allen, of the Pennsylvania Family Institute. “For the past 50 years, and after over two million abortions here in Pennsylvania, Roe has held states back from acknowledging medical advancements that have allowed all of us to more fully observe the humanity of unborn children.”

Here in Pennsylvania, the overturning of both the Roe and Casey decisions does not make abortion illegal. While the Dobbs decision does empower states like Pennsylvania to decide how best to protect unborn life, current Pennsylvania law on abortion remains; permitting abortion through the first six months of pregnancy (24 weeks) for any reason except the sex of the unborn child.

“From the very beginning of our organization back in 1989, protecting the sanctity of human life has been paramount,” said Michael Geer, the founding president of the Pennsylvania Family Institute. “Overturning Roe is a huge step towards ensuring women, children and families are fully protected. While we join with thousands across the state in celebrating what we all have been praying and advocating for, we also need to continue to link arms together in our efforts to protect unborn life in Pennsylvania and across the nation.”

In the 79-page decision delivered by U.S. Supreme Court Justice Samuel Alito, he writes, “The Constitution does not prohibit the citizens of each State from regulating or prohibiting abortion. Roe and Casey arrogated that authority. We now overrule those decisions and return that authority to the people and their elected representatives.”

The PA General Assembly has attempted to improve the state’s outdated law on abortion by passing several bills in recent years, including a ban on late-term abortions. Yet these bipartisan and sensible bills have been vetoed by pro-abortion Gov. Tom Wolf.

Pennsylvania state lawmakers, as representatives of the people, should have the opportunity to pass laws that protect human life and ensure women and families are supported. Yet Pennsylvania’s abortion industry is attempting to circumvent this legislative process by bringing their own lawsuit to our state Supreme Court in Harrisburg that may result in a ruling far worse than Roe v Wade for our state.

“Unborn children deserve a voice in the American democratic process,” says Alexis Sneller, Communications and Policy Officer at the Pennsylvania Family Institute. “Thanks to the Dobbs decision, we now have the freedom to engage on their behalf. Life is a human right and we need to work tirelessly here in Pennsylvania to protect this basic human right.”

The United State Supreme Court ruled 5-4 on the question of overruling Roe and Casey, with Justices Alito, Thomas, Gorsuch, Kavanaugh and Barrett affirming this historic decision. It is a 6-3 decision to uphold the Mississippi law limiting abortion at 15 weeks in pregnancy, with Chief Justice Roberts affirming this decision.