The Supreme Court’s decision to redefine marriage may be the most destructive ruling since Roe v. Wade – dividing our nation and setting the stage for future attacks on the family.

For Roe v. Wade and now Obergefell v. Hodges, there is a connection between the two – that being a strong connection between a pro-life culture and a pro-marriage culture. Several months ago Brandon McGinley wrote about this connection in The National Review:

A truly pro-life culture with respect to abortion — that is, a culture that places the welcoming of nascent, vulnerable human life at the center of its political, economic, and social considerations — cannot emerge from a society that views children as instrumental to the happiness and fulfillment of adults rather than as valuable in themselves. Children’s worth, like that of consumer products, will be dependent on those whose desires they are fulfilling. Dignity must be either inherent or contingent; it cannot be both….

For more than 40 years the pro-life movement has fought the idea that a living child can be reduced to a choice. The movement must understand that this idea — child as consumer choice — is exactly what is at stake in the redefinition of marriage. 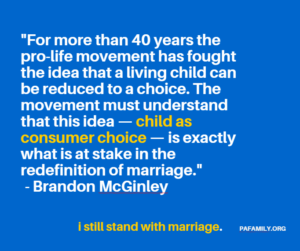