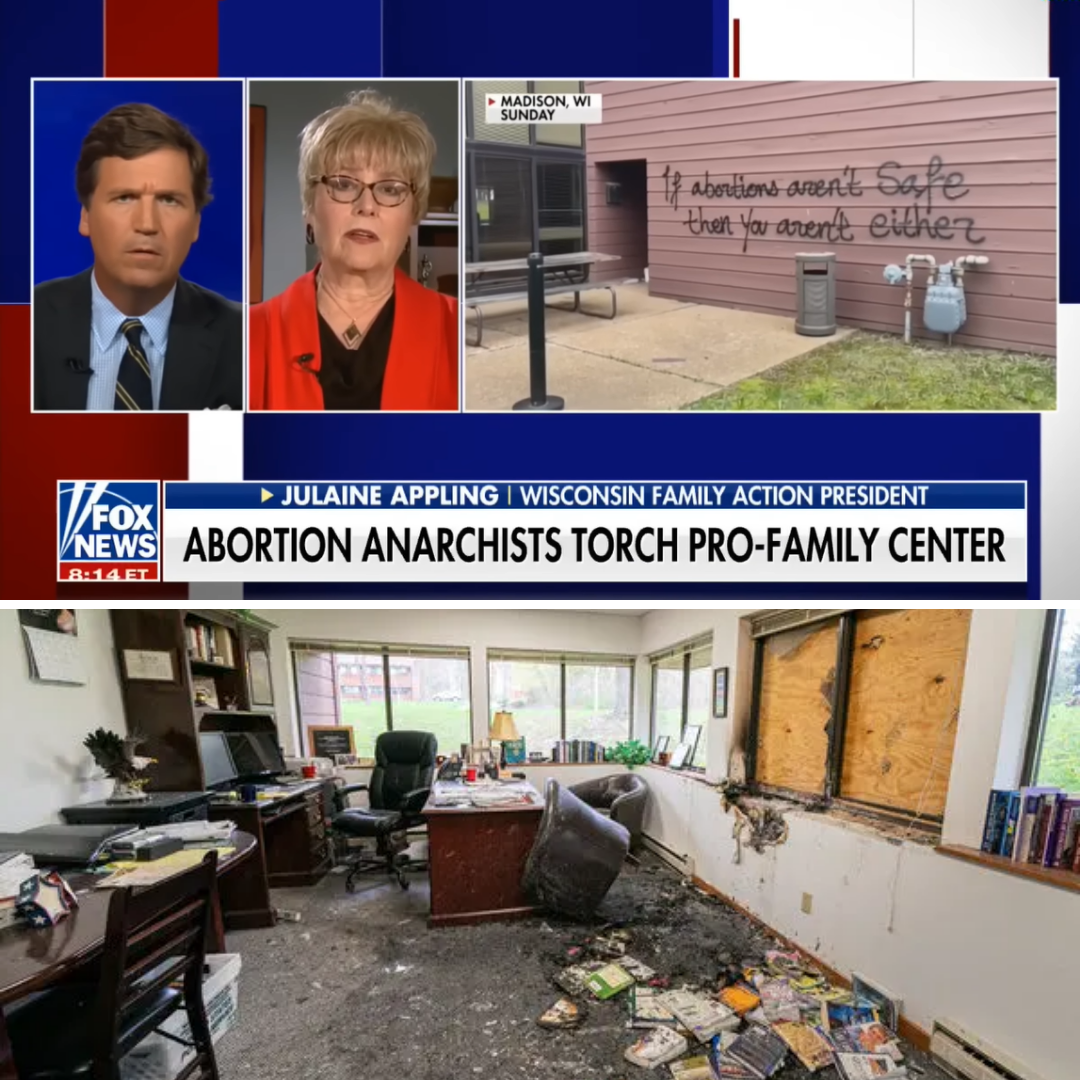 Attack on Wisconsin Pro-Family Group: “We will not back down.”

The Wisconsin Family Action, a sister organization to the PA Family Institute, was recently attacked for their pro-life leadership, with Molotov cocktails thrown into their office. The arsonists also vandalized the outside of the building with a message that read, “If abortions aren’t safe, then you aren’t either.”

Wisconsin Family Action, led by Julaine Appling, is part of dozens of family policy councils from across the country working to advance pro-family values, including protections for the unborn. Julaine was interviewed by Tucker Carlson to help highlight this recent attack.

We’re seeing an increase in violence and intimidation by the pro-abortion lobby. Pregnancy care centers, pro-life organizations and churches are being vandalized and targeted.  Supreme Court justices are also facing vicious threats and intimidation. Protests are happening outside of their personal homes – even Justice Samuel Alito and his family were forced into hiding after the Dobbs draft leaked.

Violence is never the answer, and it will only worsen the divide in our already fractured nation. Every individual should feel free to speak the truth without fear of bodily harm. Every elected officials should speak out against the pro-abortion lobby’s use of these violent tactics.

“While this attack was directly provoked by the leaked draft opinion from the US Supreme Court in the Dobbs case earlier this week, this has far broader implication,” stated Julaine Appling after the recent attack on their office. “Apparently, the tolerance that the left demands is truly a one-way street. Violence has become their answer to everything…We will not back down. We will not stop doing what we are doing. Too much is at stake.”

Julaine is absolutely right. While pro-abortion groups attempt to intimidate with violence and vandalism, we must strengthen our efforts to protect the unborn, and fight even harder for the Truth.

Please join us as we pray for everyone involved in this malicious attack and for the advancement of pro-life efforts here in Pennsylvania and across the nation, so together we may someday see a Pennsylvania where every life is cherished.