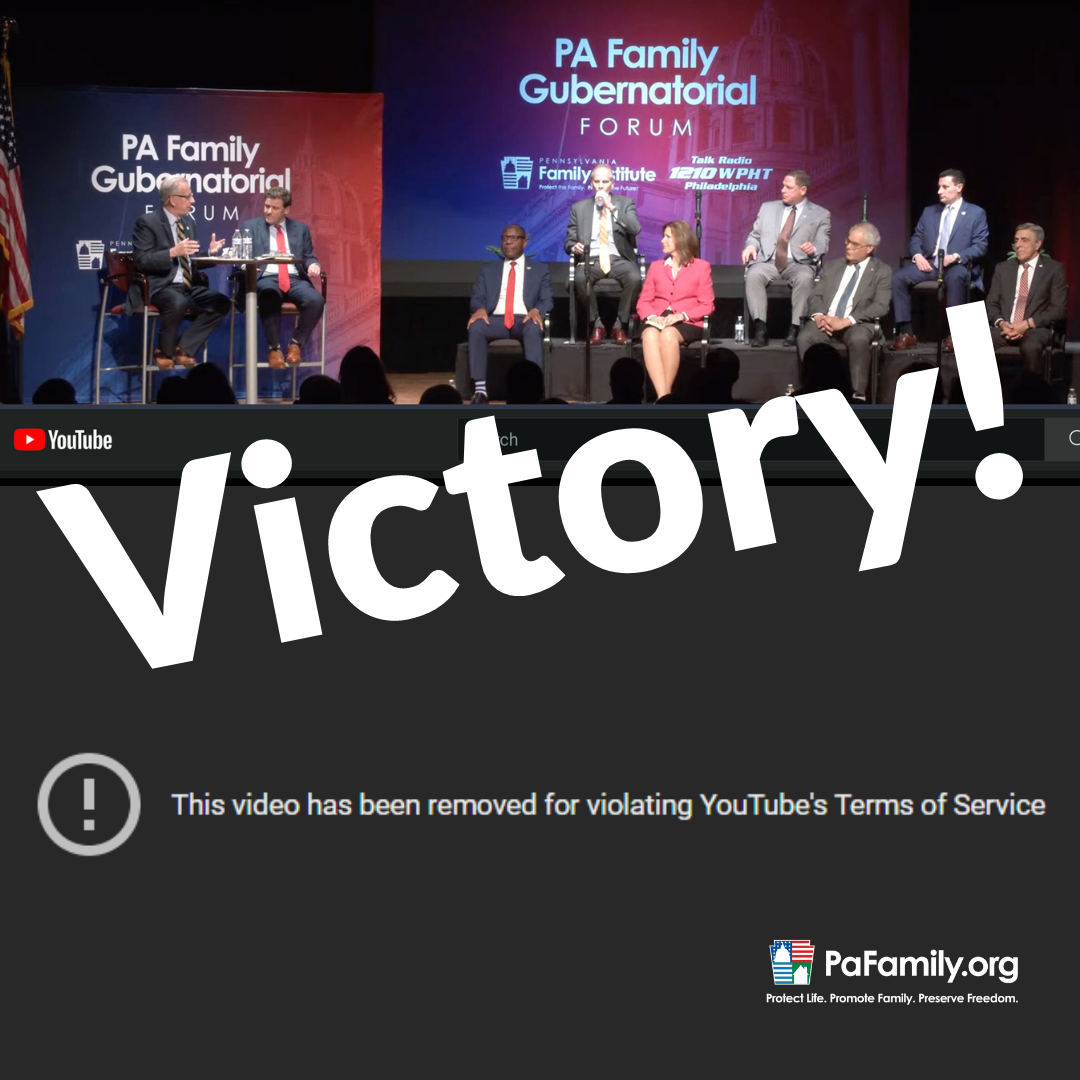 YouTube says it was a mistake to remove the forum’s livestream from Pennsylvania Family Institute’s channel.

(HARRISBURG, PA) Following significant media attention, public criticism and an appeal by Pennsylvania Family Institute, YouTube has reversed its shocking decision to remove the video of the Institute’s Gubernatorial Candidate Forum. As of last night, YouTube reinstated the video, emailed a brief apology, and stated they had made a “mistake” in blocking the video.

YouTube had notified Pennsylvania Family Institute on Sunday, March 27th that it had removed the entire video of the March 24th PA Family Gubernatorial Forum event, which was moderated by PA Family Institute President Michael Geer, and WPHT-Philadelphia radio host Rich Zeoli. No specifics were provided as to why the video was removed – other than stating it somehow violated YouTube’s “misinformation policy,” and that “Content that advances false claims that widespread fraud, errors, or glitches changed the outcome of the U.S. 2020 presidential election is not allowed on YouTube.”

The public criticism of YouTube’s censorship of the forum was significant with several of the candidates that participated issuing statements in press releases or social media decrying the video’s removal.  Numerous news outlets and commentators in Pennsylvania and beyond also reacted to the video takedown.

Pennsylvania Family Institute filed an appeal with YouTube (using its online form which only allows 800 characters in the appeal), the text of which is as follows:

The video is a 2-hr forum with 7 PA governor candidates on the PA primary ballot. 2 moderators asked them 11 questions on a range of issues. No question mentioned the 2020 US Pres. election, which YT says is the issue causing the removal. Candidates were given 75-seconds per question to answer, & full freedom to say what they wished in response. It’s not our job as neutral moderators to restrict candidates from answering the questions as they wish. To do so would deny the voters of PA the right to hear directly what the candidates think about specific issues, & put us at risk of charges of favoritism. We ask YT to restore the video. Otherwise, it’s an assault on our democracy, the freedom of candidates to state their views, & the right of voters to hear the views of the candidates.

Late Tuesday, Pennsylvania Family Institute received an email from YouTube indicating that the video had been restored, thanking us for our “patience,”  and apologizing for wrongly removing the video.  Said YouTube, “After taking another look, we can confirm that your content does not violate our Community Guidelines.”

“While we are glad that the video has been reinstated, that does not lessen our serious concern that YouTube and other social media platforms have the ability, with the flip of a switch, to turn off access to political speech they don’t like, hereby tilting the scales in our elections and the free flow of ideas crucial to a free and flourishing democratic process,” said Michael Geer, Pennsylvania Family Institute President. “Our thanks to all who spoke up and spoke out on YouTube’s censorship of the Forum video, and for the right of citizens to freely view it.”

You can view the entire livestream at pafamily.org/forumlivestream, where not only the YouTube video may be found, but also the livestream that was posted on Facebook and the full audio from the broadcast on WPHT 1210 AM.