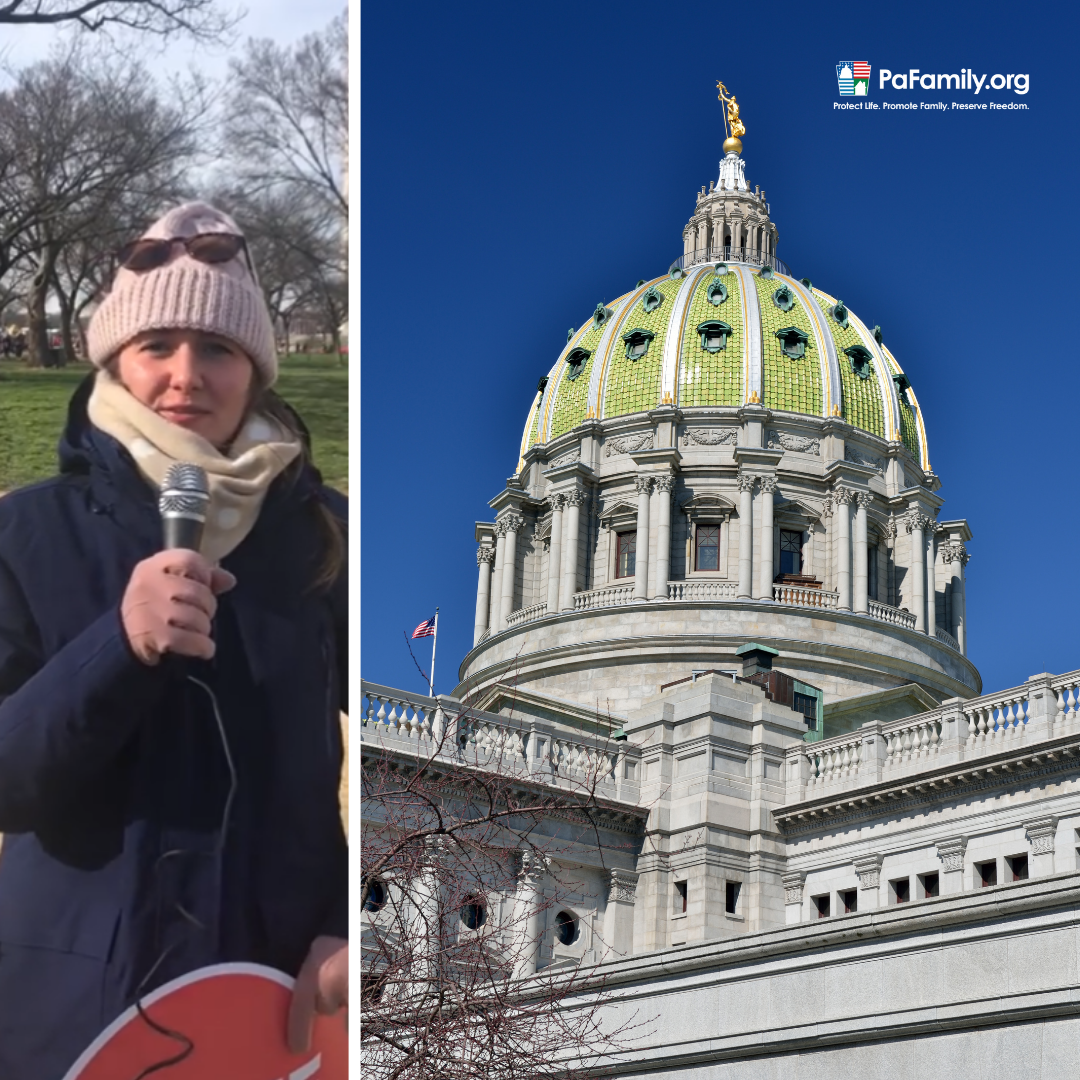 This week, a bill advanced through the Senate Health Committee that would amend the constitution to prohibit taxpayer funding of abortion. This bill, Senate Bill 956, is in response to a lawsuit, now at the Pennsylvania State Supreme Court, brought by the abortion industry to primarily force taxpayers to pay for abortions.

PA Family’s Alexis Sneller has been interviewed by several news outlets about this bill, known as the Life Amendment. She was also present in D.C. for both the December rally at the U.S. Supreme Court for the important Dobbs decision as well as the National March for Life.

We sat down with Alexis to help offer an overview of this new constitutional amendment to protect unborn life in Pennsylvania.

Some are mischaracterizing the impact of the Life Amendment, Senate Bill 956. What would this bill do?

Alexis Sneller (AS): Pennsylvanians have repeatedly agreed with the policy of taxdollars not being used to pay for abortions. For decades, through the Abortion Control Act, no state or federal taxdollars are used “for the performance of abortion” except in cases of rape, incest or to avert the death of the mother. This sentiment was repeated when the Obamacare healthcare exchange was created. Pennsylvania, through our elected leaders, passed additional protections against taxdollars being used to pay for abortions through Obamacare.

That’s why we need the Life Amendment to protect taxpayers and ensure that we are not forced to fund elective abortions. While it doesn’t change any current abortion laws in our state, it would stop the seven justices on the state supreme court from unilaterally dictating our abortion policy. The Life Amendment would protect existing pro-life limits in PA, while also allowing the legislative process to make any changes to abortion limits in the future.

We’re not the first state to defend against Planned Parenthood and the abortion industry’s attacks. Illinois, Iowa, Kansas, West Virginia, Louisiana and Tennessee are some states that have gone through this same challenge of the abortion industry using the courts to get an activist ruling. In response, several of those states are working to pass or have passed similar state constitutional amendments like Pennsylvania’s Life Amendment. It’s time for Pennsylvania to join them and to protect our citizens from the abortion industry and their drive to radicalize our Commonwealth.

Planned Parenthood, who is part of the lawsuit attempting to force taxpayers to pay for abortions, have actually claimed the Life Amendment is “circumventing the democratic process.” Why is the opposite true?

AS: The Life Amendment respects the democratic process because, if passed in two consecutive legislative sessions, it will go on the ballot for the people to decide and vote on! In fact, the Life Amendment is necessary because Planned Parenthood and their allies are the ones trying to circumvent the legislative process. The multi-million dollar abortion industry couldn’t get the legislation they wanted passed, so they decided to go around the legislative branch and ask the courts to force taxpayer funding of elective abortions, which is simply not something the majority of Pennsylvanians want.

Even more radical, if the abortion industry gets everything they want out of this lawsuit, the door would also be open to allow abortion through all nine months of pregnancy, fully funded by taxpayers for any reason, with zero restrictions. We cannot sit idle and watch this extreme position become reality.

What is the process of the Life Amendment and when would it go to a vote of the people?

Governor Wolf brags about his vetoes of sensible pro-life advancements passed by the legislature but what is unique about the Life Amendment that prevents a governor’s veto?

AS: With any constitutional amendment, it does not need a governor’s signature. Despite Gov. Wolf’s past vetoes of important bills like ending abortions by video with telemedicine, the Life Amendment is not something Gov. Wolf can veto. The Life Amendment would ultimately be decided by Pennsylvanians like you and me.

We may see the overturn of Roe v Wade this summer by the U.S. Supreme Court in the Dobbs case. What would be the status of abortion in Pennsylvania if Roe is overturned and how does the Life Amendment play into this?

AS: Roe has long been a tragic roadblock, stopping states from fully protecting the most vulnerable, the unborn. Overturning Roe would be an exciting win for the sanctity of life, but it would also mean that our work is just getting started! Overturning Roe wouldn’t ban abortion. It would simply give authority back to the states to make their own laws on abortion.

Currently in Pennsylvania we have the Abortion Control Act (which limits abortion after 24 weeks, has informed consent, a 24 hour waiting period, parental consent for minors, health regulations for abortion clinics, and more) and our statutes that prevent taxpayers from funding abortion. The looming problem is the upcoming decision by the Pennsylvania Supreme Court in the Allegheny Reproductive Health Center, et al v. Pennsylvania Dept. of Human Services case brought by the abortion industry that could jeopardize all of Pennsylvania’s existing pro-life laws. This is the case we’ve been talking about that led to the need for the Life Amendment.

Without the Life Amendment, even if Roe is overturned, an activist court could give in to the abortion industry’s wishes, forcing taxpayers to pay for elective abortions and possibly even enshrining a more radical Roe in our own state constitution. We cannot let this happen and that’s why Pennsylvanians need to encourage our State Senators and State Representatives to pass the Life Amendment, Senate Bill 956.

Take Action: pafamily.org/protectunbornlife – Contact your State Senator and State Representative in support of the Life Amendment to help protect current pro-life laws from an activist court.