We have been informed that the Scott Wagner for Governor campaign has declined to participate in our Together for Pennsylvania Gubernatorial Candidate forum with Dr. Frank Luntz. We regret this decision, but without the participation of all the candidates in the race, we have determined to cancel the event. The original event was set for February 11th, but was postponed after we learned that Sen. Wagner had a schedule conflict on that date. We have sought alternative dates that could work, but to no avail. 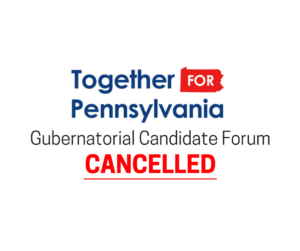 We are grateful for the generous co-sponsors of the event, WDAC & WBYN and Lancaster Bible College, and to all those who made reservations to attend. We also thank the candidates and campaigns that did agree to participate (Turzai, Mango and Ellsworth).

For the record, here are the facts regarding the decision to postpone and now cancel the forum:

Together for Pennsylvania was originally scheduled for February 11, 2018 but was postponed when the Wagner campaign informed us (on January 29th) that Sen. Wagner could not participate because of a scheduling conflict. Neither he nor his campaign had at any time committed to participating, only that the invitation was under consideration.

After confirming sponsorships, securing Dr. Luntz as the moderator and a location for the February 11th forum, by early January we invited the four (at that time) campaigns to participate. While not having yet secured all the candidates for the Forum, but with a date, venue and an excellent moderator confirmed for the event, we began promotion in mid-January with very high hopes. We did not ever state in our promotion that all the candidates were confirmed. We regret that it has been a source of confusion.

Lacking full participation, we determined to postpone the February 11th event, opened up our calendar and asked the Wagner campaign for dates that could work to reschedule the event.

After multiple discussions over the past two weeks, the Wagner campaign last week notified us that Sen. Wagner would not participate.

The Pennsylvania Family Council has a responsibility to provide accurate, insightful information about the candidates, and is committed to treating every candidate fairly and with the respect they deserve.

To Ticket Holders: For refunds, or to have the payments you made converted to donations to our Voter Guide project, please call us at (717) 545-0600 or email at council@pafamily.org.