New legislation would protect unborn children diagnosed with Down syndrome

Ask your State Senator & State Representative to co-sponsor this legislation:

Click here to email your elected officials requesting their co-sponsorship

Children and individuals with Down syndrome are valued members of their families and communities, and make meaningful contributions to Pennsylvania every day. Yet the vast majority of women who are given a prenatal diagnosis of Down syndrome elect to have an abortion. In countries like Iceland, these babies are aborted nearly 100% of the time.

Under current Pennsylvania law, a woman can obtain an abortion up to six months in pregnancy for any reason, with only one exception – if the woman’s sole reason is to select the sex of the child. Shouldn’t there be more exceptions?

If “Pennsylvanians with a disability are valued members of society” (Governor Tom Wolf), then Pennsylvania should be a place where every individual – including those with Down syndrome – is protected, respected and valued.

New legislation is being introduced and your State Senator and State Representative have the opportunity to co-sponsor this legislation that would stop any child from being aborted solely due to a diagnosis of possible Down syndrome.

Around 180 babies are born with Down syndrome in Pennsylvania every year, according to the State Department of Health. And studies show that the majority of unborn babies diagnosed with Down syndrome are aborted simply because of the diagnosis. That’s just one example of the harmful cost of abortion on Pennsylvania. And it’s something we can change.

Please tell your State Senator and State Representative to support this legislation by becoming a co-sponsor. To email, click here or go to tinyurl.com/ValueAll 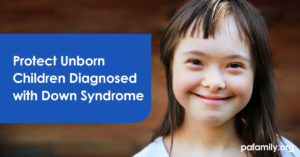