The official policy of the Commonwealth of Pennsylvania is to encourage childbirth over abortion.  So, why is Planned Parenthood given hundreds of thousands of taxpayer dollars every year?

Abortion in Pennsylvania has been on a steady decline; however, top state officials seem to be doing what they can to take our state in the opposition direction. A statistical review of abortion numbers, taxpayer funding of abortion-providing organizations, and campaign contributions to key government officials may explain why.  Let’s take a look.

According to the PA Department of Health, 30,818 babies were aborted in Pennsylvania in 2016, the lowest point ever recorded (even though the total matches the entire population of Williamsport or the entire student body of the University of Pittsburgh). It is a drop of nearly 1,000 from the previous year.

However, half of those abortions were performed by Planned Parenthood, a self-described political organization that has spent millions in Pennsylvania lobbying and campaigning for elected officials. And in some cases, especially with the help of some of Pennsylvania’s top officials, it appears Planned Parenthood is receiving reciprocal benefits.

Planned Parenthood was one of Shapiro’s top campaign donors in 2016, with nearly $20,000 directly donated to his campaign. His first TV ad touted their endorsement. 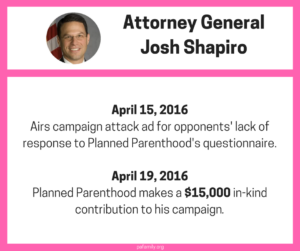 Leading into the 2016 primary election, Shapiro ran an attack ad against his competitor, Stephen Zappala, alleging his campaign refused to fill out a questionnaire from Planned Parenthood (which he denied as simply a campaign oversight). The ad first aired on April 15, 2016. Four days later, Planned Parenthood made a $15,000 direct mail donation to Shapiro’s campaign.

Now in office, Shapiro appears to be giving back to Planned Parenthood. In October 2017, he sued President Donald Trump over broadening the scope of employers who are granted a moral or religious exemption in the Obamacare mandate that forces coverage of contraception and abortion-causing drugs.

Not only is Attorney General Shapiro suing the Trump administration, but he is also targeting the Little Sisters of the Poor, an organization of Catholic nuns that serve the elderly poor in the US and across the world.  In a noteworthy US Supreme Court case, these sisters were granted an exemption from the Obamacare abortifacient mandate. Apparently not satisfied with the high court’s ruling, Shapiro joined California’s Attorney General in bringing another lawsuit against this exemption.

“Can someone tell me why taking a group of elderly nuns to court to force them to implicate themselves in providing contraception is not a form of sexual harassment?” Princeton University Professor Robert P. George

Planned Parenthood certainly has a large financial interest in these cases as Pennsylvania’s leading abortion business, and as a beneficiary of insurance or taxpayer reimbursements for contraceptives.

Auditor General Eugene DePasquale “has stood by Planned Parenthood for years,” going back to his days as a State Representative, first elected in 2007.

Planned Parenthood is one of his campaign contributors, for instance providing $1,250 in direct donations during his 2014 election.

As Auditor General, several donations that DePasquale received from Planned Parenthood were made eerily close to major announcements related to his investigation into a Pennsylvania Alternatives to Abortion program known as Real Alternatives.

Planned Parenthood made a $500 donation on September 28, 2015. A week later, on October 5th, DePasquale announced a state audit of Real Alternatives. 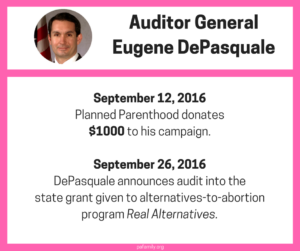 On September 12, 2016, Planned Parenthood gave him $1,000. Less than two weeks later, on September 26, DePasquale announces his audit into the state grant given to Real Alternatives.

In the time DePasquale has been Auditor General, a Congressional investigative panel found several Planned Parenthood affiliates outside of PA profit by transferring abortion baby parts to outside organizations in violation of federal and various state laws. Planned Parenthood has also failed numerous Pennsylvania state health and safety inspections, including failed reporting of child sex abuse, improper storage of aborted babies and no background checks on employees. 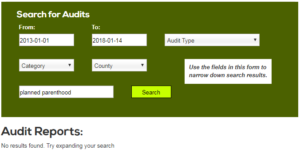 And since he has taken office, the Auditor General’s audit report database shows no record of any audit of Planned Parenthood and how it spends the taxpayer funds it receives.

The elected official with the most significant connection to Planned Parenthood is Governor Tom Wolf.

This past year he embarked on what could best be described as a public-relations tour promoting Planned Parenthood. On April 20, Governor Wolf traveled to their Warminster facility for a public discussion with Cecile Richards, President of Planned Parenthood Federation of America. The Warminster abortion clinic failed its last three health inspections (4/12/17, 8/22/17, 11/29/17), including a failure to report a botched abortion. 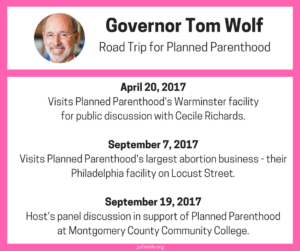 And then on September 19, 2017, he hosted a panel discussion for Planned Parenthood at Montgomery County Community College, where he boldly (and falsely) claimed “the majority of Pennsylvania is pro-choice.”

Governor Wolf was Planned Parenthood’s featured candidate in their 2014 election pledge to spend a then-record $1 million on pro-choice candidates.

A former clinic escort for Planned Parenthood, Governor Wolf has been listed as the most liberal governor in America, and he has enthusiastically followed Planned Parenthood’s agenda on numerous occasions. The most recent example: his veto of Senate Bill 3, sensible, compassionate legislation that would have updated Pennsylvania’s nearly 30-year-old abortion law that still allows abortion at times in pregnancy when babies can and are surviving outside the womb.

Governor Wolf also came to the rescue of Planned Parenthood when Senate Bill 300 was introduced, legislation that would shift funding away from abortion-minded operations like Planned Parenthood (especially since current PA law says we must “encourage childbirth over abortion.”)

When the bill passed a committee vote, Governor Wolf used it as an opportunity to attempt to show Planned Parenthood’s services – with one major problem: 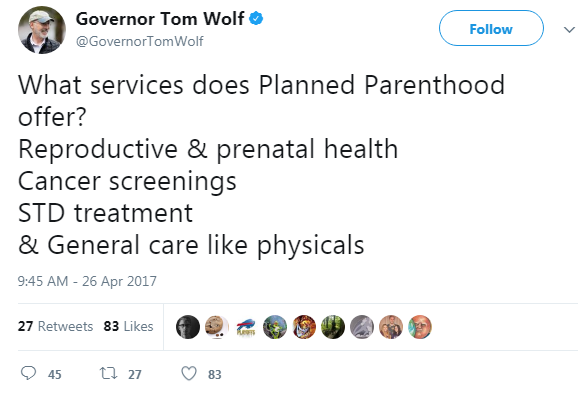 Months before Wolf posted on Twitter and emailed out this completely false claim, we called every Planned Parenthood facility in Pennsylvania and simply asked, “Do you offer prenatal services?” We called because each location fraudulently listed “prenatal” as a service on their online booking website. The response: not one offered such care. When we exposed this false claim, they removed it from their website.

In other words, profit-leader for Planned Parenthood, they are systematically growing their market share, and one can argue that taxpayer subsidies are helping it happen. 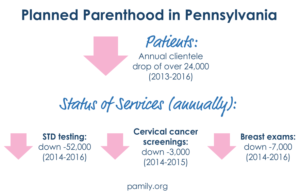 While abortion is going up at Planned Parenthood, most other services are declining in number.

For starters, it appears fewer people are trusting Planned Parenthood, as seen in the drop of over 24,000 patients annually since 2013.

Basic health services are down. STD testings have dropped 52,000. Cervical cancer screenings down 3,000. Breast exams down 7,000. 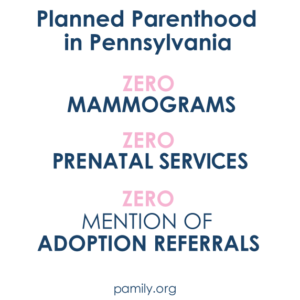 Planned Parenthood is also not authorized to perform a single mammogram. There is zero mention of adoption referrals in their annual reports. And again, zero prenatal services.

What has remained consistent for Planned Parenthood is their status as a big business in Pennsylvania. Their 2016 revenue is over $34 million and their total assets are over $38 million.

Yet politicians continue to subsidize their operations with taxpayer dollars. In 2016 alone, over $3.5 million was given at the taxpayer’s expense. That translates to 10% of their revenue.

What makes matters even worse for Pennsylvania taxpayers is that this same, taxpayer-funded Planned Parenthood operation lobbies elected officials in support of their pro-abortion agenda (and continued funding!).

Their 501(c)(3), tax-exempt entity that directly receives taxpayer funding reported spending over $780,000 in 2016 to “shape public policy at the local, state and federal levels by providing up-to-date information about legislation, meeting with public officials about reproductive health issues, mobilizing supporters to take action to protect reproductive rights, hosting community events and advocacy training, working with coalition partners, and communicating our message to the media.”

This isn’t even accounting for the lobbying and campaign spending performed by their c(4) advocacy group (Planned Parenthood PA Advocates) or their political action committee (PAC).

Will abortion continue to decrease in Pennsylvania?

Governor Wolf, in swearing in Shapiro and DePasquale to their elected positions, said this:

“By working together, we can continue to challenge Harrisburg’s status quo to give Pennsylvanians a government they deserve…Our row officers will serve Pennsylvanians well by standing by their principles and pursuing all efforts with openness and transparency.”

Is the relationship between abortion giant, Planned Parenthood, and our top leaders in Pennsylvania too close for comfort?  Are campaign contributions steering policy in support of its abortion agenda?

Pennsylvania citizens should demand a challenge to Harrisburg’s status quo, and a good place to start would be to end taxpayer funding of any entity that promotes or performs abortion. Pennsylvania taxpayers deserve a government where Planned Parenthood is not on their dime. Pennsylvania should be a place where childbirth is encouraged over abortion and alternatives to abortion are supported, not attacked.

We should all pursue nothing less.