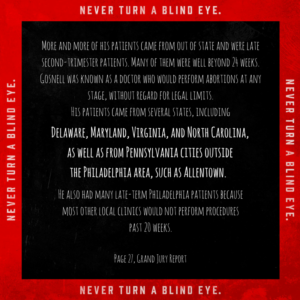 Harrisburg abortion facility fails inspection, but they’re not the only one with failures.

This law continues to have immense implications in protecting women from poor-quality care, as inspections bring current violations of standard care in abortion facilities to light. Most recently is Hillcrest Women’s Medical Center, with its myriad of violations in its 2017 annual inspection; which include not having an RN on staff, failing to complete Child Protective Services background checks, failing to throw out expired material, and failing to secure drugs appropriately.

This week, three state senators, President Pro Tempore Joe Scarnati (R-25), Bob Mensch (R-24), and John DiSanto (R-15) sent a letter to the Department of Health asking why Hillcrest has not had their license revoked due to the serious and continued inspection failures.

Another recent offender is Planned Parenthood:

With each of these failed inspections, there are follow-up inspections and grace periods that allow the facility some time to comply with the law’s requirements, but they are closed if they do not comply. Thanks to Pennsylvania’s Health Care Facilities Act, abortion clinics and their lack of compliance are now clear to the public and the state in order to help prevent another Kermit Gosnell from harming women and families.