Religious freedom and rights of conscience have been severely undermined in America in recent years. The Executive Order signed today by President Donald Trump represents a good first step towards restoring needed protection for those precious rights, and the beginning of fulfillment of his campaign promises to protect the religious freedoms of Americans. But it is only a step.

The previous administration created a climate of hostility towards religion and the right of Americans to freely live out their faith. Right here in Pennsylvania employers and faith-based schools and charities were forced to choose between their faith and continuing to operate for the good of our economy and society.

While we welcome the signing of today’s Executive Order, we call on President Trump and his administration to work towards fully fulfilling his pledge to protect religious freedom. As he said in the Rose Garden this morning, “For too long the Federal government has used the power of the state as a weapon against people of faith, bullying and even punishing Americans for following their religious beliefs.”

Today’s actions represent a start towards reversing this unwarranted government discrimination, and the Pennsylvania Family Institute will continue to work for a Pennsylvania and America where religious freedom flourishes and families thrive. 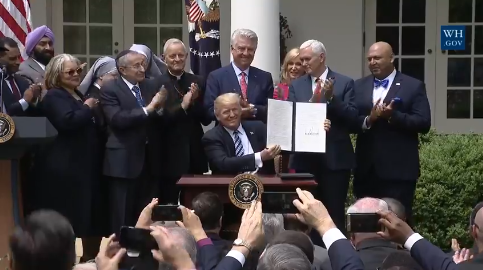