Three New Trends with Abortion in PA (#3 is shocking)

Pennsylvania Department of Health just released their latest report on abortion statistics for PA (2015). In light of this report, here are three trends to highlight:

Statewide abortions went down by over 300 since 2014; hitting a record low of 31,818. This continues the trend in fewer women having abortions. Since 2008, annual abortions in Pennsylvania have now dropped by nearly 7,000.

Sadly, this record low total is still one abortion out of every five pregnancies.

It is simply too extreme to allow babies to be aborted at the same age they are routinely surviving when born on their own. Many people don’t even know Pennsylvania allows abortion as far along as 24 weeks into pregnancy. Help PA Family Institute save babies from Planned Parenthood and the aggressive abortion industry with a donation today. 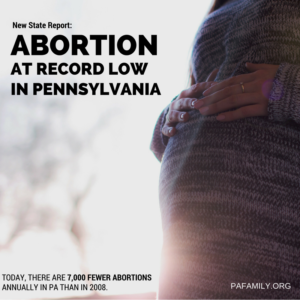