MUST WATCH: Her opening argument in the Washington florist’s case is spot on

I just finished watching the oral arguments in the case against the Washington florist and if there’s one lesson to learn, it’s that Pennsylvania does not want to reach the point where small business owners are before the State Supreme Court defending their ability to live and work according to their beliefs.

If you don’t know about the push to put such laws in place, click here. To what’s happening in Washington with this case, here are some of the highlights from today’s oral arguments:

1. Barronelle Stutzman expresses herself and her beliefs through her work as a florist: She “creates the actual expression that will be used in an expressive activity.” Waggoner also defended Barronelle’s rights of conscience and how the government is pressuring her into deciding whether to stop expressing herself or forego her business.

2. Barronelle does not discriminate against people of any sexual orientation: She has been a florist longer than I have been alive and has knowingly hired and served all kinds of people.

Waggoner opened with this: 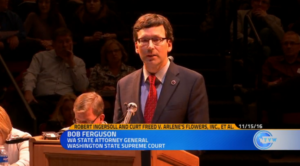 It was clear that the Washington State Attorney General wants to make Barronelle Stutzman an example as he strives to “eradicate discrimination” in Washington State. He said this is a “very simple case” of a business owner illegally dismissing a service from a customer.

He said it is different from policy that, for instance, as a cake baker I will not write profanity on a cake; as long as it is maintained equally to all customers. But in this case, it is not a policy provided equally – a florist that provides for weddings must provide floral arrangements made for a same-sex wedding ceremony.

Bob Ferguson also referred to Elane Photography (he said Elane Flowers) – a case in New Mexico where the court ruled it is “the cost of citizenship” for a photographer to be compelled to photograph a same-sex wedding ceremony. That ruling was based on New Mexico’s anti-discrimination law similar to the one in Washington State.

What he didn’t state is that Barronelle Stutzman was a florist long before Washington State passed special statuses in their anti-discrimination law or to redefine marriage in the state. So really she has the choice of 1) selling her business, 2) finding an employee who will do this (there was only one other employee that made wedding arrangements and she shares the same beliefs as Barronelle) or 3) not selling wedding arrangements at all. In other words, even though you served customers regardless of sexual orientation for 47 years, you have to make these arrangements or be “eradicated” from this marketplace.

And on the flip side, Rob Ingersoll, the man now suing Barronelle after being a customer for 10 years, was given three other florists at her recommendation who “would do a good job.” When the news story broke about this incident, over a dozen floral shops offered to do his floral arrangements for free.

4) What if a straight man orders a cake for a same-sex wedding? 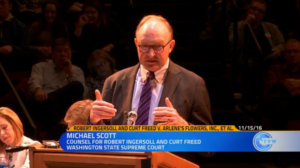 Justice Charles Wiggins asked a hypothetical question to both attorneys arguing against Barronelle: an actor recording political messages is asked to voice an ad in support of same-sex marriage. If he refuses based on his personal beliefs that marriage is the union of one man and one woman, is he in violation of discrimination under Washington State law?

ACLU cooperating attorney Michael Scott argued that if the actor had such a policy and applied it consistently to both straight and gay customers, he would be protected.

If that is the case, why is Barronelle Stutzman not protected if she has a consistent policy for straight and gay customers for not creating floral arrangements for any same-sex wedding ceremony?

A lower court ruled against Barronelle Stutzman, threatening to take both Barronelle’s business and personal assets. The State Supreme Court will now rule on the case.

Again, this should be a warning call to everyone in Pennsylvania that values religious freedom: if you don’t want your freedom on trial, don’t change current state law. The government is coming after Barronelle Stutzman not because of the definition of marriage but because of their anti-discrimination law that added the special statuses of “sexual orientation” and “gender identity.” 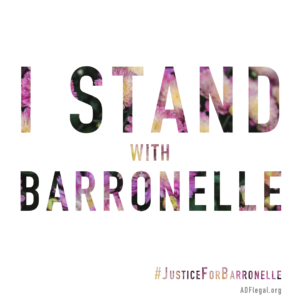 Many have shown their support for her freedom. Consider sharing her story and changing your profile picture to the “I Stand with Barronelle” logo.

No American should ever be forced by anyone – especially the government – to violate their faith under the threat of financial ruin. Please continue to pray for Barronelle, her family and all involved in this case.