Prime Example of How You Can Make a Difference

FACT: One of the greatest threats to religious freedom and personal privacy ever faced in Pennsylvania has been stopped this legislative session (2015-2016).

Back in September 2015, Governor Wolf’s Bathroom Bills were introduced (SB974 & HB1510). The powerful special interest groups pushing these bills believed passing them would be a sure thing.

This proposed law would have created for the first time in Pennsylvania law special status for “sexual orientation” and “gender identity” with broad scope in application to places of employment, housing and public accommodations, including such places as school restrooms and locker rooms. Examples of those impacted would be conscientious objectors to the redefinition of marriage who are obligated to stand by their most deeply held convictions – such as those in the wedding business or various private schools.

Thanks to the expertise of the Pennsylvania Family Council – along with the grassroots coordination of the Defend My Privacy Coalition and the effective action by citizens like you – the big-pocket lobbyists were countered and the “Bathroom Bills” defeated for the 2015-2016 session. 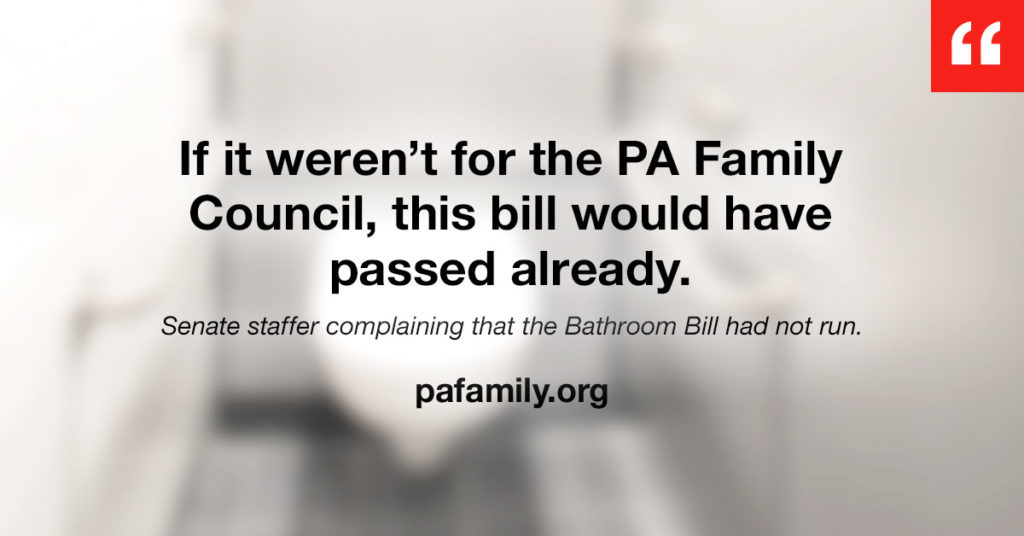 Show support for PA Family Council with a donation today.

This is truly a remarkable accomplishment. Some states have succumbed to the pressure to pass this type of law which has forced schools to open private, sex-specific places to members of the opposite sex. It has resulted in crippling fines and lawsuits on those who simply chose not to participate in a ceremony contrary to their deeply-held beliefs. Be encouraged that there is still no state law forcing these same consequences upon Pennsylvania families.

As we finish out 2016, there are two things you can help with:

1) Take a minute to sign the Thank You eCard to your State Senator and State Representative showing your thankfulness that no vote was taken on the Bathroom Bills. Click here to sign and send or go to tinyurl.com/privacyprevails.

2) Help Pennsylvania Family Council gear up for 2017 – We fully expect the same push for this legislation next year. As Pennsylvania’s top defender of religious freedom, your financial support now will help in preparation for combating this push.

If you are unable to donate at this time, please invest the time to invite others to receive our email alerts (share this like: tinyurl.com/emailsignups) or invite your Facebook friends to follow our page. So many across Pennsylvania stepped up this year and we need each of them and more as we head into next year.

On December 27, 1989, an article in the Pittsburgh Press highlighted the establishment of PA Family Institute, concluding, “PFI should provide some balance to today’s lop-sided scene.”

We are proud to stand with you in providing a balance to the onslaught against our religious freedom. Your support is critical in allowing this balance to continue.