After a nearly four-hour hearing in Harrisburg on part of Governor Wolf’s Bathroom Bills – SB1306 – here are some of the highlights:

1. SB1306 is not the end game; it’s the full Bathroom Bill proposal or nothing.

Testimony given by the ACLU, SEIU and others highlighted how SB1306 is not enough and that Pennsylvania should pass SB974; which not only changes current law on employment but covers housing and public accommodations (i.e. locker rooms and showers) as well. This presents numerous infringements on your religious freedom and privacy rights.

Trying to pass one part of the Bathroom Bills is not going to stop the pressure and strategy of those looking to redefine current law with the full Bathroom Bill proposals.

Ahead of the hearing, the largest abortion provider in Pennsylvania took time to send an email out advocating for SB1306. It asked to “email Republican leadership to voice your support of SB1306.”

TAKE ACTION – Tell your State Senator and State Representative to support your religious freedom and privacy rights and OPPOSE SB1306.

3. There is dire need for religious protections which SB1306 would strip away. 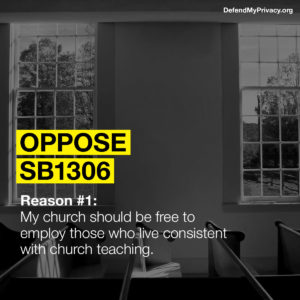 A theme from those testifying in support of Governor Wolf’s Bathroom Bills was that religious organizations should be forced to hire people who disagree with church teaching on marriage and human sexuality, and that existing religious protections for ministerial employees is more than enough protection.

Just taking SB1306 as it is written, if it became Pennsylvania law:

SB1306, or any of Governor Wolf’s Bathroom Bills, do not have adequate religious protections.

4. There is no systematic discrimination against the LGBT community regarding employment.

The head of the Pennsylvania Human Relations Commission (PHRC) shared they receive approximately 3,500 complaints every year; which cover alleged discrimination based on numerous causes such as race, age or disability.

The PHRC supports the Bathroom Bills and would seek additional budget funds to “address the anticipated increase in complaints” over alleged sexual orientation, gender identity or gender expression discrimination.

This anticipated increase in cases is not what has played out in other states. In 2006, Washington State passed what Pennsylvania is considering now with adding the special statuses of sexual orientation and gender identity to state anti-discrimination law. Since 2006, there have been only 76 complaints filed with Washington State’s Human Rights Commission alleging discrimination based on sexual orientation. That same Human Rights Commission has found probable cause in zero cases.

There exists no widespread discrimination against the LGBT community in employment that SB1306 needs to fix. What does exist by passing these types of proposals is crippling fines on those trying to live out their religious beliefs as well as exposing women and young children to members of the opposite sex in vulnerable areas like locker rooms, showers and restrooms.

This and related bills to amend anti-discrimination law are unnecessary. Pennsylvania is already a tolerant and diverse place to live and work.

5. Scare tactics continue to be used in attempting to pass SB1306.

One scare tactic stated in the hearing was that if we are going to compete with the business community and attract millennials to Pennsylvania, we must pass SB1306 and the Bathroom Bills.

This frankly is an absurd claim that lacks factual evidence.

For instance, the “2015 Best and Worst States Rankings” by Chief Executive showed that of the top ten states for business, nine did not have a SOGI law (adding special statuses of sexual orientation and gender identity). In contrast, of the bottom ten states for business, nine did have such a state law. And Census data not only shows Pennsylvania has a growing millennial population but is now a far more diverse age group than in previous generations. 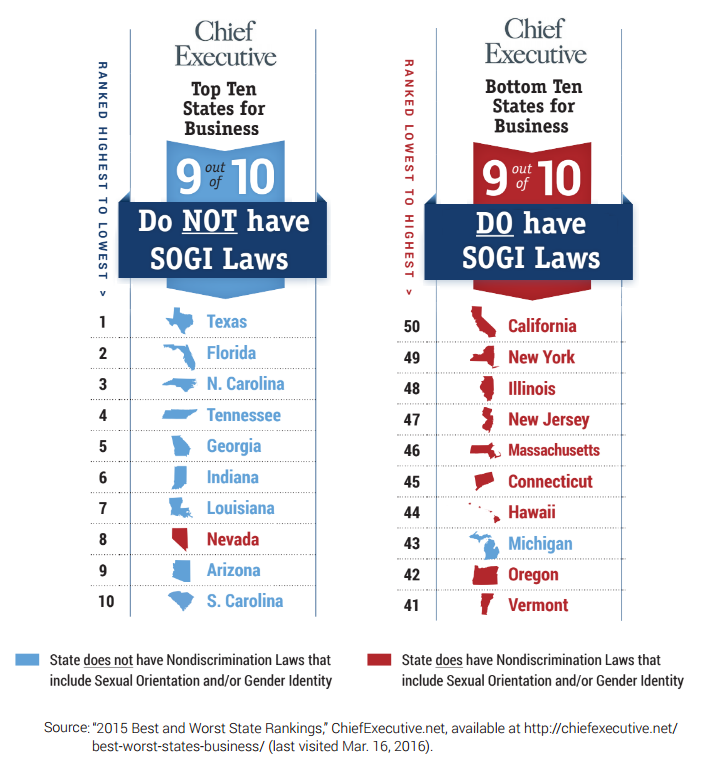 TAKE ACTION: SB1306 is bad policy. It would remove privacy rights by forcing employers to open their sex-specific locker rooms, showers and restrooms to the opposite biological sex. SB1306 would also undermine the freedoms of those involved in churches, religious schools, ministries or religious non-profits by making it illegal to only hire employees that agree with their faith teaching on sexuality, marriage and gender. Tell your State Senator and State Representative to OPPOSE SB1306.