From Michael Geer, President of the Pennsylvania Family Council:

It’s vitally important that I update you on expected actions at the State Capitol this week – actions that could significantly affect you and your family, your future and your freedom. The Pennsylvania General Assembly is poised to act on legislation that would create significant discrimination against ministries and people of faith, undermine true tolerance, and put the personal privacy and safety of our families at risk.

Your voice is needed now to stop this attack on our freedoms.

In my 27 years here, I’ve never seen such extreme special-interest pressure being focused on your State House and Senate members – backed with big money and influence from groups like the Gill Action Fund and the American Unity Fund.

For months, these groups have been working behind the scenes here in Harrisburg, hiring influential lobbyists to push an agenda that directly attacks personal privacy and devastates freedom of conscience and religious liberty.  Last week, they came out into the open, trying to force votes on their prized legislation with a massive push in both the House and the Senate to move their bills.

And last week, we stopped them! Thousands of calls, emails and visits to legislators from folks like you from across Pennsylvania thwarted back-door schemes to advance the “Bathroom Bills” in both chambers. 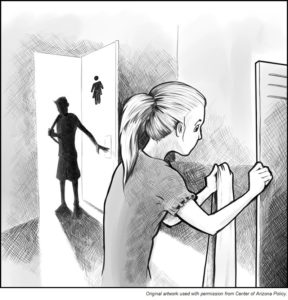 In the House, an expected vote on what’s called a “discharge resolution” that would move the bill did not happen thanks to the grassroots contacts made by people like you all across Pennsylvania.  Now, it looks like they may try it again, perhaps as early as next week.

In the Senate, there is a different back-door ploy underway– splitting the bathroom bill into three separate bills (SB 1306, SB 1307 & SB 1316), to camouflage the real impact. Their first attempt to move those bills last week was stopped, proving that the truth and the voice of the people can overcome the special interests.

In response, those national advocacy groups got angry, taking to social media to attack our integrity, resorting to name-calling and spreading untruths about their agenda. They claim it will not harm religious freedom, and they claim their proposals won’t force open women’s bathrooms, showers and locker rooms to men.  Both claims are false.  (See our position paper detailing the impact of the legislation.)

And they’re ramping up the pressure, with the out-of-state groups demanding action on their agenda. They’ve poured a lot of money into getting what they want, and so the battle continues.  I know they’re hoping our side will grow weary, or give up.  We must not! Our freedom, true tolerance and personal privacy are at stake!

Now, a key Republican Senator, Scott Wagner, sponsor of SB 974 (the “Bathroom Bill”) and advocate of the bill-splitting strategy has scheduled a committee vote for TODAY (Wednesday, June 22nd).  This committee vote could light the fuse for the full package of legislation that discriminates against ministries and people of faith, undermines true tolerance and puts personal privacy and safety at risk.

***UPDATE – SB1307 was passed in the Urban Affairs and Housing committee 6/22/16 and SB1306 was added as an amendment. Religious freedom protections were voted on and defeated.

This is Gov. Wolf’s top legislative agenda, and frankly, it’s surprising that a leading Republican Senator is out front, pushing this legislation.  But remember, the out-of-state special interests are fully behind this back-door plan.  We’ve seen their lobbyists going door-to-door in the Senate.  We cannot let them win, and the key is the voice of the people – folks like you and me.

If you wonder whether your involvement makes a difference, I promise you that it does.  Just last week, the Press Secretary for one of the Senators opposing our position tweeted out some derogatory comments about us, but then added that we have an “outsized influence” on what happens in the Capitol.

He’s right on that point.  Thanks to you, we do have significant influence at the Capitol. We don’t have anything close to the money or staffing that the other side is bringing to bear on this issue.  But we have you – and many thousands of others like you all across Pennsylvania – praying, giving and taking action in an effective and respectful way. And together, by God’s grace, we can continue to win.  We demonstrated it last week.  Let’s do it again!

P.S.  Please consider a generous donation to help us keep up the fight.  Support often dwindles at this time of year, but as you can see, the battle continues to rage.  Your support helps us keep all hands on deck, making the case for liberty and life at the Capitol and across Pennsylvania.