Majority Agree: We Should Have the Right to Say ‘No’

Proponents of the “Fairness Act” like to say that their proposal enjoys the support of a strong majority of Pennsylvanians.  But like with all polling, it depends on how you ask the question.

If the “Fairness Act” concept—the introduction of “sexual orientation, gender identity, and gender expression” into state non-discrimination law—is presented as a totally costless “advancement” in “legal protections” for “marginalized classes,” then of course many people will sign on sight-unseen.

But when the costs of this policy are presented to them, Americans (and Pennsylvanians in particular) react quite differently.  Two polls from earlier this year bear this out. 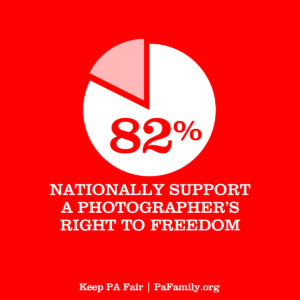 A national poll found in August that, when presented with the religious liberty costs of these policies, 82% of Americans answered ‘No’ when asked if “the federal and state government should be able to require by law a private citizen to provide a service or their property for an event that is contrary to their religious beliefs.”

And a Pennsylvania poll from earlier this year found that 65% of Pennsylvanians oppose a law “which would allow for penalties, fines, and lawsuits against individuals who refuse to provide wedding-related services to same-sex couples even if their refusal is based on their strongly held religious beliefs.”

82% of Americans.  65% of Pennsylvanians.  Overwhelming majorities do not want to punish religious persons for bringing their beliefs about marriage to their business vocations.  This reflects a long-standing, deeply-American preference for permitting diverse people to work out their differences in freedom and neighborliness, not through the hammer of state power. 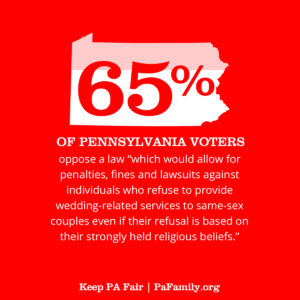