A vote is expected in the U.S. Senate Tuesday, September 22, on legislation that the majority of Pennsylvania voters favor: ending late-term abortions by stopping elective abortions past five months of pregnancy.

New polling released by the Pennsylvania Family Council (PFC), along with the national pro-life group Susan B. Anthony List (SBA List), found that 59% of Pennsylvania voters support the Pain-Capable Unborn Child Protection Act, federal legislation to limit abortions after 20 weeks, or 5 months of pregnancy, based on the unborn child’s ability to feel pain.

Support for the legislation is substantial across party lines, with 73% of Republicans, 58% of Independents and 50% of Democrats all in favor of limiting abortion to 20 weeks of pregnancy.

Women strongly support the legislation and in higher numbers than men. 62% of Pennsylvania women support this legislation, including 63% of women ages 18-54.

“Whether pro-life or pro-choice, Americans should be able to agree that we should limit abortions after five months of pregnancy, when the unborn child can feel excruciating pain,” said SBA List President Marjorie Dannenfelser. 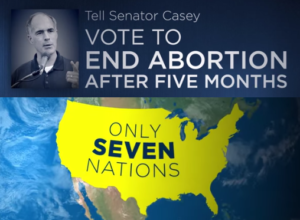 Pennsylvania’s two U.S. Senators – Pat Toomey and Bob Casey – will vote on the Pain-Capable Unborn Child Protection Act. Encourage both to vote in favor of limiting abortion after five months of pregnancy

Earlier this year, the U.S. House passed the Pain-Capable Unborn Child Protection Act in a bipartisan vote of 242-184. Additionally, 14 states have passed state-based versions of this legislation. National polling by Quinnipiac, National Journal, Huffington Post, NBC/Wall Street Journal, and Washington Post/ABC News all found that a plurality or majority of Americans support limiting abortion after five months and that women support the measure in higher proportions than men.