“I thought I was going to be just drawing blood, not procuring tissue from aborted fetuses….they partner with Planned Parenthood and they get part of the money.” – Holly O’Donnell, a licensed phlebotomist

“I think a per-item thing works a little better, just because we can see how much we can get out of it.” – Vice President and Medical Director of Planned Parenthood of the Rocky Mountains (PPRM) in Denver, CO, Dr. Savita Gind 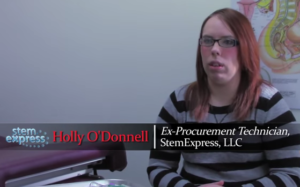