Sadly there’s another reason why Planned Parenthood should not be receiving a dime of taxpayer dollars in Pennsylvania (they currently receive millions): Planned Parenthood Federation of America’s Senior Director of Medical Services, Dr. Deborah Nucatola, is caught on video describing the process of selling body parts of aborted babies (which you could probably guess is illegal – it’s a federal felony to buy or sell for profit human body parts):

“a lot of people want hearts these days….people wanted lungs…always as many intact livers as possible….some people want lower extremities too…”

“I would say it’s anywhere from $30 to $100 [per specimen], depending on the facility and what’s involved.”

This is simply disgusting. Not only have we dehumanized the unborn through abortion but places like Planned Parenthood are now treating their bodies as commodities to be sold to the highest bidder. 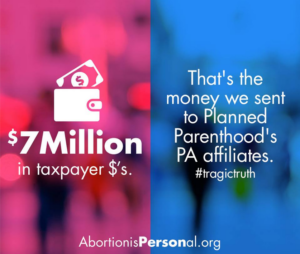 Do something about it – Right now Planned Parenthood in Pennsylvania is receiving our taxpayer dollars. And it’s in the millions – at least $7 million was given in 2013. Make it known to your State Senator and State Representative that as they debate the state budget there is no debate over ending all government payments to Planned Parenthood. Click here to send an email or go to tinyurl.com/stoppayingplannedparenthood.