Another Planned Parenthood employee discussing the sale of aborted baby parts: “I want a Lamborghini.”

“Well, why don’t you start by telling me what you’re used to paying!”

“You know, in negotiations whoever throws out the figure first is at a loss, right?”

“Let me just figure out what others are getting, and if this is in the ballpark, then it’s fine, if it’s still low, then we can bump it up. I want a Lamborghini.” 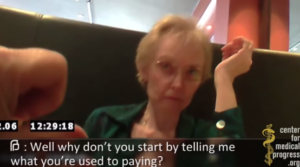