Be The Father That Shows Up

This Sunday being Father’s Day, let me tell you a story.

Just this morning, my friend Nashon Walker posted a picture of himself holding his young daughter Ariana, who was smiling broadly.  I was moved and inspired by the post.  Because under the photo, Nashon wrote this: 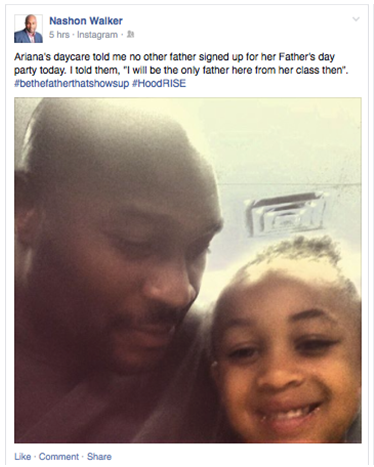 Ariana’s daycare told me no other father signed up for her Father’s day party today. I told them, “I will be the only father here from her class then”.‪#‎bethefatherthatshowsup ‪#‎HoodRISE

You see, Nashon grew up in poverty in Philadelphia.  Both his mom and his dad were drug addicts, and mostly absent from his life.  Nashon ended up in prison with a long sentence. But, while there he was led by his cellmate to faith in Christ, and by God’s grace, has had an amazing turnaround.

He was released after only serving 18 months when his dad admitted to being ultimately responsible for the crimes Nashon was charged with.  Upon his release, Nashon Walker connected with a great church and solid mentors, helped free his mom from drugs and prostitution (and led her to the Lord!), graduated from Messiah College, and is now teaching business classes, doing prison ministry, writing and performing music, and helping others get their lives on track.

Plus, he married a wonderful woman and now has three beautiful little girls, and as you can tell from his Facebook post above, he is taking fatherhood seriously!  What a difference that will make for his little girls.

This Father’s Day, I salute Nashon Walker and all the many heroes out there who, in spite of the hardships and difficulties they may have faced or now are facing, have determined to “Be the Father That Shows Up.” 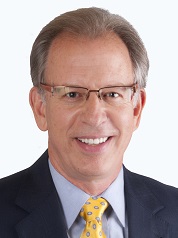 Have a Happy Father’s Day!