It’s encouraging to see fatherhood being affirmed and appreciated in this year’s Super Bowl ads. Hopefully this shows we’re moving away from the comic renditions of dumb and disconnected Dads to highlighting the important influence a father has on their family. Well done Dove (#RealStrength), Nissan (#WithDad) and Toyota (#MyBoldDad): 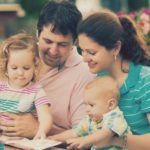 “Fatherhood remains one of the critical foundations for the health of our current generation and for those that will follow.”  Tony Dungy – NFL Spokesman, All Pro Dad.