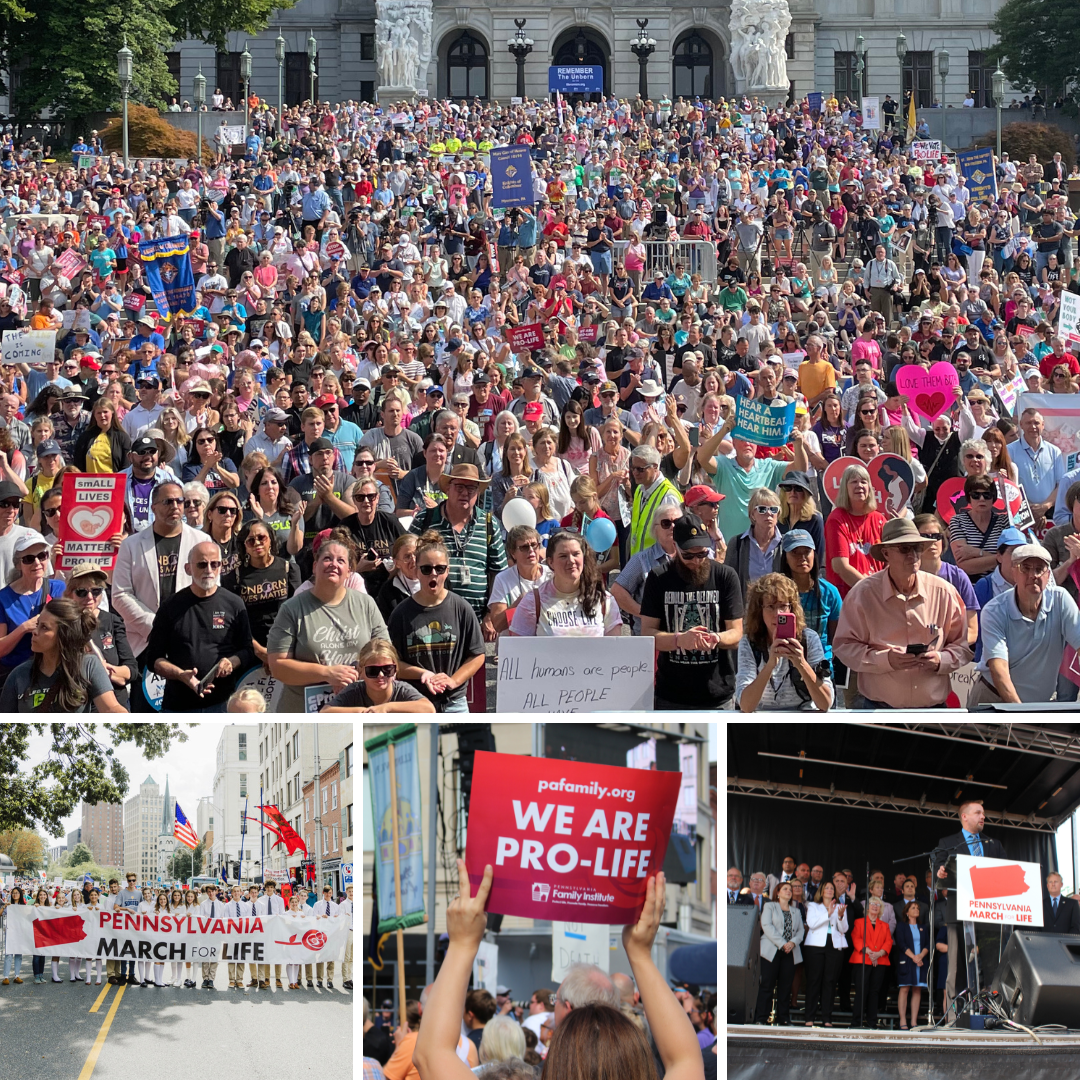 Seven Takeaways from the PA March for Life, the 1st State March since Roe Overturned

The second-ever Pennsylvania March for Life was a huge success thanks to everyone in Pennsylvania’s pro-live movement coming together to rally and march for the protection of unborn children.

Last year, many state lawmakers commented how the first-ever PA March for Life was the largest rally they had ever seen. This year’s march was even larger than before; topping last year’s estimated 5,000 attendees!

Whether you were there in-person or watching the livestream online, here are seven highlights from the day’s events:

One State Representative commented that he could hear the crowd from the PA House chamber. “I’ve never heard that before.”

Even Gov. Tom Wolf took notice, and instead of calling us “anti-women” like he did last year (despite the majority of marchers and speakers being women), he called us “forced-birth advocates” and the “loud minority.”

March for Life’s Jeanne Mancini took notice, rightly pointing out the extreme position of Gov. Wolf that is out of touch with what Pennsylvania families want (and need).

Much prayer went into this event and we thank many who used our prayer guide to present requests to the Lord regarding the impact of this rally and march. Thank you for your prayers.

Many media outlets reported about the rally and march. As one Central PA TV station pointed out during live coverage, “That place looks very packed. We haven’t seen a rally like this in quite some time.” Another reporter wrote, “One of the largest gatherings of people at the Pennsylvania Capitol in recent years.”

We thank many State Representatives, State Senators and U.S. Congressman who supported our efforts and continue to work towards advancing pro-life laws in Pennsylvania.

“THANK YOU to the thousands of individuals who showed up today at the Capitol to give a voice to the voiceless and fight for the unborn! It was great to see so many York Countians at the second annual March for Life in Harrisburg.” – PA State Senator Kristin Phillips-Hill

Along with the rally and march, there were many other supportive events taking place this year. There were two masses held at the Cathedral of St. Patrick. There was a pre-march prayer and praise rally, led by PA Family’s Robert Albino. There were testimonials given by women with Silent No More.

Also, after the march, many made their way into the PA State Capitol to connect directly with lawmakers in their Harrisburg offices.

We thank everyone who helped make such a full and impactful day at this year’s Pennsylvania March for Life!

Events like the Pennsylvania March for Life are critical in advancing a culture of life in our state that ultimately will help save lives. But there was also a life saved during the day’s events.

A mobile ultrasound unit was parked next to the stage during the rally. The organization Undefeated Courage, led by Becky Biter, uses this mobile unit outside of abortion clinics and other locations to help women facing unplanned pregnancies.

A woman who lives in the downtown Harrisburg area decided to take a walk and unknowingly came upon the site of the Pennsylvania March for Life. She took notice of the mobile ultrasound unit and stood observing it for some time.

She then approached Becky and her team and said, “I think I want to do this.”

She was welcomed in and given private counseling. She thought she was pregnant and the father was pressuring her to have an abortion. She wasn’t sure what she wanted to do. The staff gave her a pregnancy test that turned positive. An ultrasound confirmed that she was 17 weeks pregnant.

She asked for prayer that she would have the courage to keep this baby. An appointment with a local pregnancy center was made for the next day!

How amazing is this? Praise God! Please keep her along with her unborn child and family in your prayers.

Each speaker at the rally helped to build our message of compassion for women and families along with a charge to redouble our efforts in the wake of the overturn of Roe v Wade.

With Mancini’s leadership as the head of the March for Life, Dr. Ruberu experience as an OB/GYN, Barnette’s powerful pro-life testimony of being conceived in rape and McElhinney’s energy as she drew attention to the horrors of Kermit Gosnell (and those that allowed his horrors to go on for so long), it was an incredibly impactful rally.

The size of our rally was amplified even louder by what took place the very next day. Planned Parenthood and the abortion lobby attempted to counter the impact of the Pennsylvania March For Life by not only having activity in the Capitol during the day of our march but the very next day they held a rally of their own. This rally was organized by Planned Parenthood, the ACLU of PA, the Women’s Law Project and more. They even hired an out-of-state PR firm to promote the event. They had less than 80 people in attendance.

This picture says a thousand words and more.

Dozens of participating organizations, who serve vital roles in a variety of areas in our state’s pro-life movement, joined thousands of Pennsylvanians from all across the state in one common goal – to protect unborn children.

Even abortion activists took notice of this unified rally. A progressive blogger wrote about the event, “I can’t remember the last time I saw such solidarity.”

The Pennsylvania March For Life was such a beautiful display of unity in our state’s pro-life movement and we pray this unity will continue throughout the coming year.

For more about the Pennsylvania March for Life, visit Pa.MarchForLife.org.