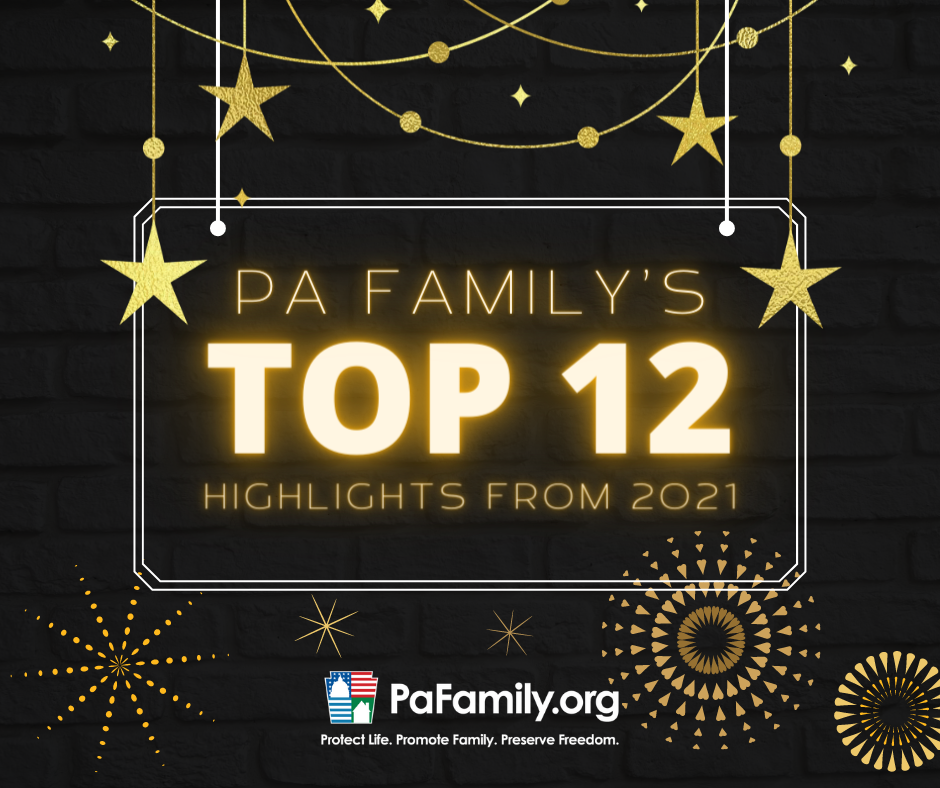 Thanks to so many who partner with PA Family, this past year has been filled with incredible accomplishments and impactful initiatives. Here’s a list of twelve highlights from 2021 that supporters from across Pennsylvania helped make possible:

1. Organized “the largest crowd I’ve ever seen” (PA Senate Majority Leader Kim Ward) in Harrisburg for the first-ever Pennsylvania March for Life. Estimates of over 5,000 in attendance for this first-ever rally and march in support of life.

2. Saved more lives from situations of girls being coerced into abortions than ever before. Girls as young as 14 years old were facing intense coercion to abort their baby. “Because of your support our legal team was able to step in and help save these lives from abortion.” – Randall Wenger, Chief Counsel

3. Hosted the largest class ever for our City on the Hill Youth Leadership and Worldview Conference. This past July, we had double our average attendance with high school students from across Pennsylvania.

4. Several opportunities to share about the dangers of critical race theory. Our workshop at the PA Leadership Conference garnered the most views of any online video from this year’s conference. “Critical race theory seeks to change our culture through indoctrination…It will serve to divide, deconstruct, dismantle and destroy the system as we know it.” Retired Judge Cheryl Allen, Of Counsel

5. Hosted a number of educational webinars on timely topics, including a discussion on the so-called Equality Act with Dr. Andrew Walker and Dr. Carl Trueman, marking 10 years since the Gosnell grand jury report release with Ann McIlhinney, and insights from leading expert Dr. Kevin Sabet on the harms with full marijuana legalization.

6. Taking a leading role in exposing the horrific fetal experiments happening at the University of Pittsburgh. We were involved with several rallies and thousands of PittExposed.com petition signatures were delivered to legislative leaders.

7. First time covering some school board races in our PaFamilyVoter.com Voter’s Guide. We provided candidate information on over forty school districts and plan to expand that reach moving forward.

9. Several court victories where our Independence Law Center wrote briefs in support of religious freedom and other core values. Some of these victories include a professor protecting his right to free speech in the classroom as well as the important decision in the Fulton case at the US Supreme Court.

12. Laid the groundwork for a PA faith-based opioid crisis taskforce as well as engagement into Pennsylvania’s Latino community.

$25,000 Challenge Grant: Invest in the Church Ambassador Network: Help us reach more pastors and churches while building relationships with elected officials to impact communities for the glory of Christ. Your tax-deductible gift will go towards making our current $25,000 Challenge Grant. Click here to donate.