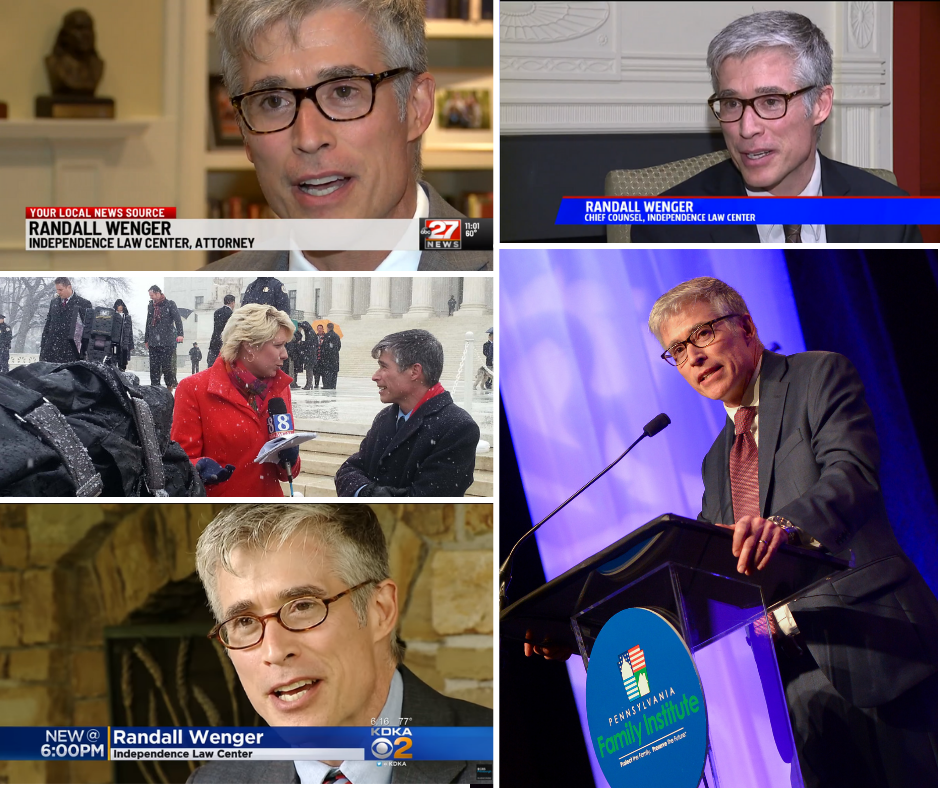 Randall Wenger has spent decades defending religious liberty. Whether it’s advising a parent on what to do with a school situation or gaining a religious liberty win for Lancaster County based Conestoga Wood Specialties before the U.S. Supreme Court, Wenger has shown he’s a champion for preserving our God-given rights.

I sat down with Randall to discuss student rights and religious freedom.

As we approach the seasons of Thanksgiving and Christmas, what rights do students have to share their faith in school?

Schools run into trouble with this kind of hubris, such as when a school prohibited a fifth-grader from handing out an invitation to a Christmas party because it was taking place at her family’s church.

Unfortunately, not only church, but also the Bible and all things religious are often treated like an allergen in school. We’ve seen John 3:16 on candy censored at Halloween. I can think of plenty of things inappropriate to show children during that time, but John 3:16 is not one of them. Or we had a case with a student whose mother was not excited about a school Halloween party. But she decided that they could make it a redemptive moment and dress up as Jesus Christ as a kind of witnessing opportunity. The school said her son couldn’t be Jesus but suggested dressing up as a Roman emperor instead.

We shouldn’t have situations where our religious exercise is treated as poison in our schools. It’s important that we create an environment of respect for people’s faith, particularly for kids.

The good news is we win these cases. And most of them are worked out behind the scenes. As a result, students are able to pray, they can talk about their faith, and they can bring their faith into discussions at school and in school projects. Students don’t have to hide their faith. They are able to make use of every opportunity to bring Christ into school — particularly when we’re coming into this Christmas season.

What would you say to teachers who want to freely practice their religion?

RW: There are limitations that apply to what teachers say that don’t apply to students, but there are many ways that teachers can still exercise their faith. For instance, they can have Bible studies with other teachers. When students bring up deep questions, even deep questions about religion, teachers have an opening to answer. And the Supreme Court has been clear that it is not creating an environment where all things religious are off limits. So, for instance, schools can even have classes that help students to understand the history of different literature, including the Bible. And if teachers are discussing the history behind different holidays, they can discuss the religious history–or even sing traditional Christmas songs. It’s not as if teachers need to treat everything that has some kind of conjunction with religion as off limits.

And one of the most important things that teachers can do is to allow their students to take the opportunity to exercise their faith.

You’ve helped a lot of students and parents over the years. Does one case stick out to you?

RW: One of the most rewarding experiences involved a parent who called up because she had read about what happened in Mechanicsburg with a student Bible club. She told us that she couldn’t afford an attorney but wanted to know if we could point her in the right direction. Then she pointed out a really egregious situation — her child being told she can’t share her Valentine’s Day cards with her classmates because there’s a Bible verse on them. She knew it didn’t seem right but she didn’t think she could do anything about it because of the cost. In that moment it was such a blessing to be able to say to her that this is precisely why we exist and that we don’t charge anybody anything. We know how difficult it is to navigate this world that we live in, and we’re here to give parents like that help so that their rights aren’t taken away.

As a parent it can be so frustrating to send your kids into a school environment because you feel like everything is taken away (and I think particularly during the last 18 months), and so we’re able to give parents hope to say, “There’s a way to get through this and to glorify God in the way that you do it.”

Moving beyond the school settings, does the government permit the use of religious symbols and traditions, such as prayer, in our society?

One example of that is when you look at the Lehigh County seal. It depicts those things that made Lehigh County what it is. Included in their seal is a cross because of the religious people who settled the area. And that’s why we settled Pennsylvania. You look at William Penn’s story — he was imprisoned because of his faith, and he was inviting people to come here for a holy experiment in religious liberty. This helped the rest of the nation understand religious liberty as an underpinning of our country.

The reason we have religious liberty as the first right in the First Amendment is in no small way thanks to William Penn. So you look at the kind of influence that the faith of our settlers has had. We do ourselves a disservice when we forget those things, yet there are so many who want to treat religion like poison or religion like asbestos, which has to be remediated from society.

So we were able to do a friend-of-the-court brief in support of Lehigh County on behalf of sixteen states. It was important to the attorneys general of those states, and it was an opportunity to be vigilant on an issue important to the entire country.

Part of maintaining religious freedom is making sure that religion isn’t treated as something that needs to be hidden, but rather something that we can celebrate. You had asked about prayer. We forget the history of religion – the First Congress, which passed the First Amendment with the Establishment Clause, was also the Congress that instituted the congressional chaplain. Religious exercise in that way was something that the first Congress itself was engaged in, so we wrote a friend-of-the-court brief after the Pennsylvania House of Representatives was sued because of its legislative prayer. This case ended up with a phenomenal result where the Third Circuit Court of Appeals recognized the history of these legislative prayers. So it doesn’t look like these legislative prayers are going away anytime soon — and boy do we need them.

You’ve done a lot with churches, as well. What do church families face regarding intrusive local policies?

RW: We’ve had a lot of cases involving church taxation. The larger principle when it comes to taxing churches is that the power to tax is the power to control. You see it all the time in the income tax code where people change their behavior because of wanting to get favorable tax treatment. So you don’t want the government using its taxing power to manipulate people and especially not to manipulate the church itself.

That’s the larger principle for why we’ve been interested in these tax cases. But we’re also interested in making sure that churches are able to use their funds to support gospel ministry. That not only benefits the kingdom of God, it benefits everyone around those churches.

We need to make sure that churches aren’t shackled in their ability to do that. There are so many things that government can’t do. We look to the government to fill in gaps where things in society break down. But the best way to keep society from breaking down is to have strong social institutions, and the best social institution is the church itself. So we’ve been able to help churches on multiple occasions with tax issues, and it’s been so rewarding.

I’m thinking of one case in particular where the government was arguing that the church wasn’t using its facility for church purposes. As a result, we were able to talk about the gospel over and over and over again. The reason that the church had built its facility and the way it was using its facility was to further the gospel. It had basketball hoops in the wall. Why? So it can have community outreach so it can share the gospel. It’s all purpose room opens up to a kitchen. Why? So it can have fellowship meals and break bread because it’s part of what its members do for the gospel. They use it for their baptisms because this is central to building a church, which is central to the gospel. So everything it was doing tied back to the gospel. It was one of the most fun briefs because everything in that case was about the gospel.

In encouragement to people who look at our work and think, “Oh, you’re involved in so many ugly things because the world is so messed up” — realize instead that  we’ve got all kinds of opportunities to be an influence to the world around us in a positive way because of these things that are happening. We’ve got opportunities. In that case we had an opportunity to talk about the gospel and the kingdom of God — so I love it. There are opportunities not just to fix wrongs but to advance truth.

It was eight years ago this month that the Supreme Court granted review of the Conestoga Wood Specialties case. What’s been the importance of this case?

RW: One of the most wonderful things that we have at the Independence Law Center is remarkable clients. We have some tremendous clients who love the Lord, are looking to make a difference, and have good reputations and tone when they talk about things.

So it was a real pleasure working with the Hahns and with the attorneys for Hobby Lobby because our cases got consolidated and had opportunity to collaborate together. We got a chance to see how big the kingdom of God was through the talented people God brought together to bring about a phenomenal result.

People often feel like they’re alone. I think that is the enemy trying to isolate us rather than realizing there are so many good people who want to do the right thing. Seeing how God worked behind the scenes to bring good people, good clients, and the right arguments — it’s just a real privilege.

Invest in PA Family Institute: Partner with us to help protect life, promote family and preserve freedom in Pennsylvania. Click here or go to pafamily.org/support.