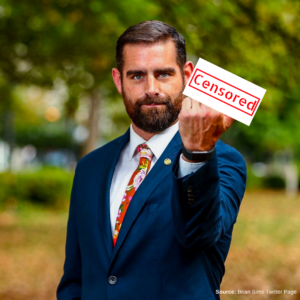 This is State Representative Brian Sims – just appointed to a new commission by order of Governor Tom Wolf to “improve the lives of all Pennsylvanians” on LGBTQ affairs. This picture (which we have censored) is currently pinned to his Twitter page making sure all his visitors see him giving Vice President Mike Pence the finger ahead of a visit to Philadelphia.

On June 19, State Representative Brian Sims (D-Philadelphia) posted a formal picture of him giving the middle finger to Vice President Mike Pence, which garnered national attention for his brazen disregard for civil discourse and values that many Americans hold. Sims continues to pin the picture on Twitter, which he told Vice President Pence ahead of his visit to Philadelphia to, “get bent, then get out!”

Less than a week later, Governor Wolf tweeted about Rep. Sims, but instead of repercussion for his actions, he actually praised him; saying he was proud of Sims for a recent recognition he received by USA Today.

And now Governor Wolf is honoring Rep. Sims once again, this time with an appointment to a new commission that’s charged to “improve the lives of all Pennsylvanians.”

Governor Wolf has taken the unilateral action to appoint 40 individuals to a state “Commission on LGBTQ Affairs” – something no other state has created. There are eight functions of this commission, including “advise the Governor on policies, procedures, legislation and regulations that impact LGBTQ individuals and communities.” They will also develop and recommend to Governor Wolf policy in specific areas such as education.

Each member will not receive any compensation but may choose to be reimbursed for travel expenses.

Three elected state officials – Senator Larry Farnese and Representative Dan Frankel along with Representative Sims – are among the members and all three are the most vocal proponents of what has become known as the Bathroom Bills, proposed legislation (Senate Bill 613 and House Bill 1410) that not only threatens religious freedom but privacy rights of those in Pennsylvania. How heavy of an influence this commission will have on advancing this troubling legislation remains to be seen.

Governor Wolf has continued to be an outspoken supporter of the proposed Bathroom Bill, claiming it is a “black-eye” in our Commonwealth’s laws without it. He has also passed several other executive orders that add special statuses of sexual orientation and gender identity and expression into various state policies.

If we want Pennsylvania to remain a place where citizens are not forced to participate in events contrary to their beliefs as well as keep men out of women’s locker rooms and showers, we must continue to do all we can to stop the proposed Bathroom Bills from advancing. To contact your State Senator and State Representative to oppose the Bathroom Bills, click here.