The following is the introduction from one of the legal briefs submitted in support of the students from Boyertown Area School District in their to protect their privacy rights.

As Americans, we enjoy a right to bodily privacy. We have always had separate privacy facilities for men and women, boys and girls, not because we seek to affirm affiliation with other men or with other women, but because of the differences between the two sexes and how that impacts our understanding of modesty, dignity, and an environment free from sexual harassment. Indeed, were differences between the two sexes not the defining factor in privacy facilities, there is no reason for separate spaces. In 1975, when writing a commentary for the Washington Post regarding the proposed Equal Rights Amendment, Justice Ginsburg stated with regard to the contention that restrooms would be opened to both men and women:

“Separate places to disrobe, sleep, perform personal bodily functions are permitted, in some situations required, by regard for individual privacy. Individual privacy, a right of constitutional dimension, is appropriately harmonized with the equality principle.” Ruth Bader Ginsburg, The Fear of the Equal Rights Amendment, THE WASHINGTON POST, April 7, 1975.

In light of our near universal shared understanding of personal privacy in intimate settings like locker rooms, showers, and restrooms, there have been very few cases until quite recently that raise these issues outside of the Fourth Amendment context of searches or correctional or juvenile facilities. Yet even in the complex context of searches and correctional and juvenile facilities where interests in immediate public safety and order come into play, we have recognized those privacy rights—the right of our bodily privacy against seeing or being seen by someone of the opposite sex. This is all the more true for members of the general public and, in particular, our children whose care we entrust to our schools.

We have recognized a right to bodily privacy from persons of the opposite sex not only under the Fourth Amendment but also the Fourteenth Amendment. See Doe v. Luzerne County, 660 F.3d 169, 175-76 n.5 (3d Cir. 2011) (recognizing a Fourteenth Amendment fundamental right to bodily privacy from persons of the opposite sex viewing our partially clothed bodies). Some now seek to deconstruct the meaning of “sex” so that it is no longer grounded in human reproductive nature and objectively confirmable via the biological differences between male and female, but instead means nothing more than our subjective gender identity. Regardless of the attempt by some to manipulate language, our understanding of bodily privacy has always involved a particular sensitivity to the anatomical differences between the sexes. This expectation of bodily privacy is deeply rooted in our traditions, and the governmental violation of such privacy steals our modesty, dignity, and sexual privacy in a way that is inconsistent with ordered liberty.

It is that expectation of bodily privacy from persons of the opposite sex that animated the opposition to the now-rescinded Obama administration letter requiring that access to privacy facilities like locker rooms, showers, and restrooms be regulated by gender identity rather than sex. And bodily privacy is the basis for which the implementing regulations for Title IX preserve separate facilities on the basis of “sex,” 34 C.F.R § 106.33,2 a term that has long been understood to mean biological sex. This interest in bodily privacy from persons of the opposite sex can also be found across our laws dealing with such issues as school facility requirements, building codes, and even our understanding of discrimination law. Opening up privacy facilities on the basis of gender identity rather than sex not only violates privacy but also suffers from absolute unworkability since gender identity is non-binary and many genders are neither male nor female.

In addition to sacrificing personal privacy, permitting members of the opposite sex to enter these private spaces also constitutes sexual harassment. Plaintiffs experience loss of dignity, anxiety, stress, humiliation, embarrassment, apprehension, and distress as a result, and can no longer engage in the normal and important activities of using the restroom and changing for physical education class without such feelings due to the presence of members of the opposite sex.

In the instant case, four students of the Boyertown Area School District have brought suit as a result of the school’s violation of their fundamental right to privacy, in order to reinstate biologically distinct locker rooms and restrooms. Joel Doe, while changing in the locker room discovered that there was a female behind him, wearing nothing above her waist other than a bra. When he and other students visited the assistant principal to report this incident, the assistant principal told them that they would need to tolerate people of the opposite sex in the locker room with them and make changing with them as natural as possible. Similarly, Jack Jones, in his underwear in the locker room, discovered a female student near him. Mary Smith encountered a male student in the girls’ restroom. Macy Roe fears that she will find herself in the restroom with a boy. As a result of this policy, Mary Smith will not return to Boyertown Area High School next year. Joel Doe may not return either.

Plaintiffs seek a preliminary injunction to protect their right (and that of their fellow students) to personal privacy while using privacy facilities that were designed, pursuant to state law, to be used exclusively by members of one sex.

Every Thursday in May – A call to pray to protect our right to personal privacy. Click here for details. 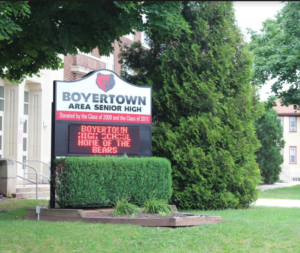