Mother’s Message to State Lawmakers: “Either Down syndrome is a life worth living or it’s not.”

Imagine if someone said, “No one forced us to have our daughter. And as much as we love her, we would never force anyone else to have a girl. Instead we would like to persuade people that women can lead rich, fulfilling lives and so can their families. But forcing anyone to bear a girl when they really desired a boy is repugnant.”  That would clearly be offensive. Now replace the references to girls with references to babies with Down syndrome.  It’s still offensive and, well, repugnant.

Currently in Pennsylvania, abortions may be performed up to 24 weeks gestation for any reason, with the exception of the gender of the baby. The Down Syndrome Protection Act would add to that exception by ending the practice of selectively aborting babies solely due to a diagnosis of Down syndrome. As a mother to a 12 year old son prenatally diagnosed with Down syndrome, I proudly defend the value of his life as equal to any other. But as a pro-choice supporter, it became difficult to assert the absolute worth of that life while simultaneously conceding that prospective parents should decide if that life was worthy enough to be their child. The hypocrisy became too great to defend. Either Down syndrome is a life worth living or it isn’t. One look at my son’s joyous face confirms without question that his is a large, beautiful life more fulfilling than most. I often wonder, “Why me?” because I don’t know what I did to deserve such an amazing kid.

Despite the hyperbole of opponents, this bill no more forces anyone to have a baby with Down syndrome than our current law forces anyone to have a girl. If that were the case, only boys would be allowed to be aborted.  This bill clearly distinguishes that the sole reason for abortion cannot be due to the diagnosis of Down syndrome which is not the same as making childbirth mandatory. If a woman had no means of support or she didn’t want to have another child, or for countless other reasons, this law would not remove abortion as an option.

Opponents also attempt to deny that this is a disability rights law. When I received the results of my amniocentesis test, it revealed both that our unborn baby was a boy and that he would have Down syndrome. The doctor recommended scheduling an abortion as soon as possible since I was already 21 weeks into the pregnancy and time was running out. To be clear, abortion wasn’t being mentioned because the baby had XY chromosomes. It was because he had 3 copies of the 21st chromosome, a confirmed diagnosis of Down syndrome .  My pregnancy was now being treated differently solely because of the disability diagnosis. However, a prenatal diagnosis is not a free pass to allow disability discrimination. To suggest then that a law that would end this discrimination isn’t really about Down syndrome or disability rights is an incoherent fallacy.

It has been suggested that forcing a woman to have a child with an unwanted diagnosis would put the baby at risk for mistreatment. Why not entertain the possibility that the parents will learn a love and compassion unlike any they’ve ever experienced from raising this child? Further, adoption is often left out of the conversation completely. I was fortunate that my doctor informed me about a registry of families waiting to adopt a baby specifically with Down syndrome. Not one or two waiting families, but 150. I was struck by the number. And ashamed. If so many people wanted to raise a baby like ours, why would we abort him?

Some argue that efforts should be focused on the need for increased disability services. The way to solve that need isn’t for people with Down syndrome to not be born at all. In fact, a true disability advocate would support the protection of those with disabilities starting at the diagnosis of that disability.

I am not proud to admit that I struggled initially with the prenatal diagnosis but I’m blessed to be where I am today. I am a better mother, wife and person because of my son. Overall, our lives are pretty normal. My son attends his neighborhood school, plays soccer and hockey, and loves electronics and all things Penn State. He’s a silly, sociable boy who is the center of his doting parents’ worlds and happens to have an extra chromosome. He has shown us that the way to a more inclusive and kind society that accepts diversity of all kinds is to begin that acceptance at diagnosis. It is disingenuous to fight discrimination of people with Down syndrome in the community while condoning discrimination at diagnosis.  The Down Syndrome Protection Act promotes the inherent worth in all of us.

Jessica Capitani is a contributing author to the book Gifts: Mothers Reflect on How Children with Down Syndrome Enrich Their Lives. 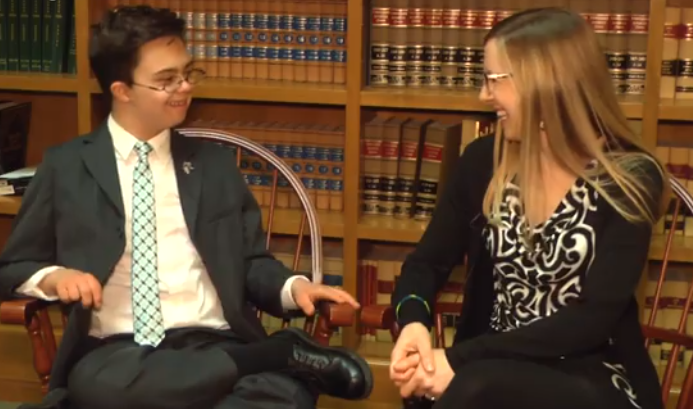 Use our Citizen Action Center to tell your State Senator to support the Down Syndrome Protection Act (House Bill 321): pafamily.org/protect