One region of Pennsylvania is providing a perfect example of the difference between high-quality comprehensive women’s health care through Federally Qualified Health Centers (FQHCs) and the limited abortion-focused business of Planned Parenthood.

The Lehigh Valley is one of the fastest growing communities in Pennsylvania. 730 square miles that includes the tri-city area of Allentown, Easton and Bethlehem; of which their combined population is only eclipsed in the state by Philadelphia and Pittsburgh.

On December 15, 2016, the Department of Health and Human Services announced over $50 million in funding for 75 health centers in 23 states – including one health center recipient in Pennsylvania: Neighborhood Health Centers of Lehigh Valley (NHCLV), which currently serves Allentown, Easton and Bethlehem.

The HHS award of $287,546 to NHCLV allowed them to open a new clinic on April 12, 2017, in the heart of Easton’s West Ward, an underserved community which is expected to help 3,000 new patients with “comprehensive health care services including, primary care, prenatal care, women’s health and family planning, mental health services and dental care.”

NHCLV is a Federally Qualified Health Center serving the Lehigh Valley with three clinic locations and an administration office. Their goal is “to help patients learn to navigate the complicated world of health care, strengthen connections with their clinicians, and set and accomplish goals that improve their quality of life.” They cannot turn anyone away regardless of a person’s ability to pay.

An exciting way NHCLV is connecting with their community is their referral partnership program, “Lehigh Valley Super Utilizer Partnership” integrating patients with primary care, hospitals and specialists. This earned them the 2015 Innovation Hero award at the Lehigh Valley Business’ second annual Healthcare Heroes ceremony. The partnership is trying to improve patients’ health while reducing medical spending. NHCLV is “developing a model that is sustainable and applicable across the population,” says Phillip M. Burrell, a health care market researcher.

“They’re like family,” says Lydia Dupree, a NHCLV patient. “You can call them any time you need help, they are there.”

With all of this investment in serving the health needs in Easton, what’s truly telling is Planned Parenthood actually closed their Easton facility just one month before this new clinic opened; which was in a different part of town focusing on two area High Schools.

Planned Parenthood Allentown is currently the lone clinic location in the region for the state’s largest abortion business in Pennsylvania. They closed their Bethlehem facility years ago in addition to the most recent closing of their Easton location. It is part of the Planned Parenthood Keystone region, one of three regions in the state.

Planned Parenthood Allentown failed their annual registration inspection with the PA Department of Health three years in a row, from 2013-2015.

On February 23, 2015, they failed their annual registration inspection after it was determined they did not have Federal Criminal Background Checks for several practitioners and employees that were permitted to work alone with children.

They failed this same registration inspection on February 27, 2014, after it was determined “the facility failed to ensure a patient transfer from the facility to an acute care hospital emergency department.” This was the result of an in-clinic abortion on March 15, 2013 that resulted in excessive bleeding with noticeable blood clots and an eventual trip to the ER by ambulance. There was no documentation of this transfer to the hospital and no recommendations were made regarding this incident. It was also found that they “failed to ensure patient medical records were stored in a manner to protect from damage.” In addition, they were not storing medical records properly and confidentially, with eight boxes of file folders labels with patient names clearly visible on plastic shelving units and other boxes with information on patients who had abortions over the past three years stored under three water-stained ceiling tiles.

On February 7, 2013, they “failed to ensure emergency intravenous solution was not expired in the examination rooms and the emergency drug cart.” Three of the four bags of 0.9 percent Sodium Chloride intravenous solution, which is used to replace blood volume when excessive bleeding occurs, had past expiration dates.

These three inspection failures all happened after Planned Parenthood Allentown failed an unannounced inspection on May 31-June 1, 2012, with regards to the newly-passed state law in the wake of the abortionist Kermit Gosnell scandal, placing the same health standards of Ambulatory Care Facilities upon surgical abortion centers. This inspection revealed a whopping 28 categorical failures, including the disposal of aborted babies down the sink, use of unsanitary equipment with dried blood, no pre-anesthesia evaluation of patients and only washing soiled linens in warm water.

A statewide comparison of Federally Qualified Health Centers versus Planned Parenthood sheds even more light on the existing contrast in services.

Planned Parenthood in PA also received a 15 percent raise in government funding in their latest reporting year – totaling close to $6 million for 2015.

FQHCs even offer women transportation to their appointments and any referrals, not something Planned Parenthood invests in.

If we can put aside all pro-life versus pro-choice rhetoric and simply look at the facts surrounding the provision of the best women’s health services, there is a clear difference between clinics like Federally Qualified Health Centers offering comprehensive women’s health care compared to the limited services from Planned Parenthood that are primarily influenced by the sale of abortions. Taxpayer funding for women’s health should reflect this difference. 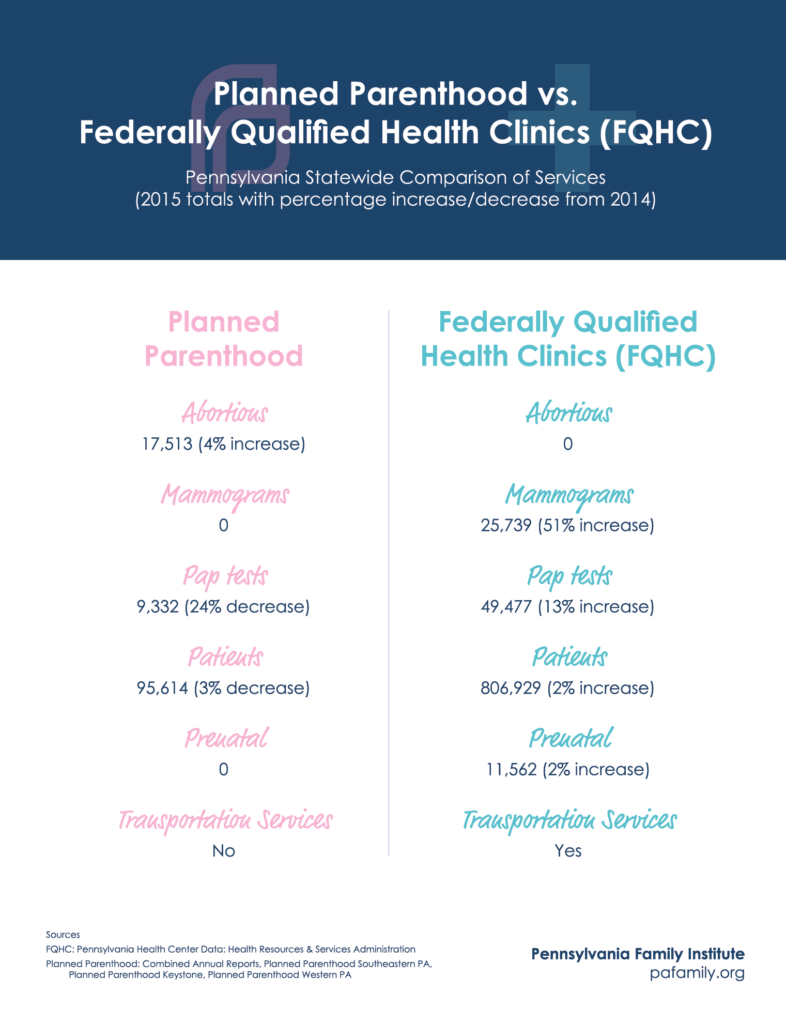