Pennsylvania Family Council, joining over 30 other Family Policy Councils from around the country, signed on to a brief filed with the United States Supreme Court in what will be one of the most influential cases in a generation on the rights to religious freedom.

The “friend-of-the-court” brief was filed in support of Jack Phillips, a cake artist and owner of Masterpiece Cakeshop, and his right not to be forced by the government to convey a message that is against his religious beliefs. The case, Masterpiece Cakeshop v. Colorado Civil Rights Commission, will go before the U.S. Supreme Court this fall.

In short, the brief celebrates the long standing American tradition of allowing for individuals and business owners to live their lives in accordance with their conscience, free from government retribution. It highlights historical Supreme Court cases and current stories of people choosing not to communicate a message because it violates their sincerely-held beliefs.

“This brief will relate stories of artists who refused to reproduce Bible verses they found objectionable, design clothing for politicians they dislike, or to recreate flags of American enemies,” the brief says. “But it will also go beyond, illustrating how corporations now view the decision to do business itself as a political act, granting or withholding economic opportunity on the basis of the rights of conscience of their leaders, employees, and shareholders.” 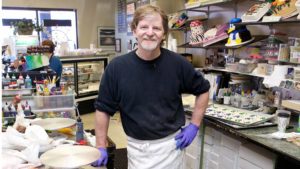 Jack Phillips, a Colorado native and cake artist, opened Masterpiece Cakeshop in 1993 and has served the community of Lakewood, Colorado for the last 23 years.

As one reporter wrote of his store:

“Walking into the store is akin to walking into an art gallery of cakes.”

The two men filed a complaint with the Colorado Civil Rights Commission for sexual orientation discrimination. An administrative law judge ruled against Jack Phillips in December 2013, saying that designing and creating cakes for same-sex wedding ceremonies are not speech protected by the First Amendment. The commission also ordered Jack and his staff to design cakes for same-sex wedding celebrations, go through a “re-education” program, implement new policies to comply with the commission’s order, and file quarterly “compliance” reports for two years to show that Jack has agreed to every request by customers to promote any event and message that may conflict with Jack’s religious beliefs.

On June 26, 2017, the Supreme Court granted review of the case. Oral arguments will likely be scheduled for some time in the Fall of 2017.