Today, Governor Tom Wolf – while Pennsylvania lingers without a finished budget – toured the single largest abortion center for Planned Parenthood in the state, where more than 20,000 babies have been aborted over the last four years. 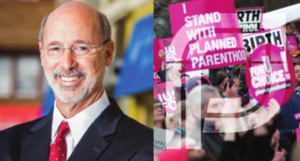 Instead of working to solve the current budget crisis, Governor Wolf went on-site to praise the Elizabeth Blackwell Health Center in Philadelphia, the single-highest abortion center by volume for Planned Parenthood in Pennsylvania. According to their reports to the PA Department of Health, Planned Parenthood performed 20,084 abortions from 2013-2016 at this center alone.

“This one Planned Parenthood location averages nearly 100 abortions a week,” says Michael Geer, President of the Pennsylvania Family Institute. “This should never be a place where an elected official spends time and taxpayer money to take a tour and offer their praise.”

Planned Parenthood: 55% of abortions in PA

Tom Wolf continues to show his deep support for the largest abortion business in the state. In April, he stood with Cecile Richards, President of Planned Parenthood Federation of America, at their location in Warminster. Gov. Wolf is also the only governor to have volunteered as an abortion clinic escort for Planned Parenthood.

This location (on Locust Street) has failed ten of their last eighteen patient safety inspections and six of their last eleven building inspections. For one of their failed inspections (August 2015) it was found that “products of conception” – aborted baby parts – were being stored in an unlocked storage freezer with undated bags and heavy ice buildup inside the freezer. It was also found that they were improperly sterilizing surgical equipment and there were also several darkened stains found on the carpet and patient benches.

This facility is only three miles away from the former “House of Horrors” clinic run by the infamous Kermit Gosnell. Planned Parenthood was staunchly opposed to legislation that made abortion facilities in PA follow the same rules as every other surgical facilities – including mandatory safety inspections. 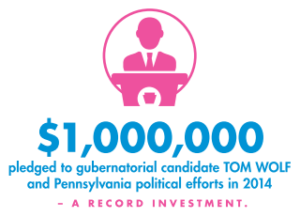 Planned Parenthood PA PAC pledged to spend $1 million in the 2014 election – primarily on Governor Tom Wolf’s candidacy. And they are already gearing up to spend on his 2018 campaign, setting up donation pages saying, “we must hold the line right now, and work tirelessly to re-elect Governor Wolf in 2018!”

“Planned Parenthood has closed twelve facilities in PA over the last five years,” said Tom Shaheen, Vice President for Policy of the Pennsylvania Family Institute. “They are performing fewer basic health services and offer a limited set of services yet their abortions are climbing and they continue to receive millions in taxpayer funding every year. That’s not something any Governor should be a part of praising.”