Planned Parenthood Keystone made a net profit of over $621k in their last reporting year with over 25% of their revenue coming from government grants – i.e. your tax dollars.

So let’s put this equation together:

Event organized by Planned Parenthood Keystone, which is funded, in part, by taxpayers

THIS MUST END. It’s time Planned Parenthood fights for their own agenda without the help of taxpayers across Pennsylvania.

The leading abortion business in Pennsylvania and nationally does not deserve our taxpayer dollars. Here are two ways to encourage your elected officials to take action:

1) State level: SB300, introduced by State Senator John Eichelberger, would prioritize current taxpayer dollars to first be directed to the many community health centers that offer better comprehensive women’s health care than Planned Parenthood. (Remember, women can’t even get prenatal care at a Planned Parenthood in Pennsylvania). Tell your State Senator and State Representative to support SB300 today – click here to use our action alert to send your elected officials an email.

***SB300 is on the agenda for the Senate Finance Committee on Wednesday, April 26. Please contact your State Senator before to voice your support for SB300.

For more on Planned Parenthood, click here to download a statewide analysis of the largest abortion business, their partisan politics and why it’s time to end their taxpayer funding. 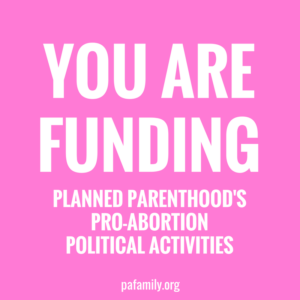