Over 75 prominent religious and thought leaders nationwide, including the Most Rev. Charles J. Chaput (Archbishop of Philadelphia), have come together as charter signatories of “Preserve Freedom, Reject Coercion,” a statement that affirms every American’s freedom to peacefully live their lives according to their beliefs and opposes government coercion or censorship of fellow citizens who have different views.

In recent years, laws that add sexual orientation and gender identity as new special statuses, just like Governor Wolf’s Bathroom Bills would have done this past year in Pennsylvania – have been used to fine and threaten people if they disagree with the government’s view on marriage, sexuality, and the right to bodily privacy. All laws must respect freedom and promote justice for every citizen, no matter who they are. Everyone should be free to peacefully live and work according to their beliefs without fear of unjust punishment by the government.

Here’s the letter in its entirety:

As Americans, we cherish the freedom to peacefully express and live by our religious, philosophical, and political beliefs—not merely to hold them privately. We write on behalf of millions of Americans who are concerned about laws that undermine the public good and diminish this freedom for individuals and organizations alike.

We affirm that every individual is created in the image of God and as such should be treated with love, compassion, and respect. We also affirm that people are created male and female, that this complementarity is the basis for the family centered on the marital union of a man and a woman, and that the family is the wellspring of human flourishing. We believe that it is imperative that our nation preserve the freedoms to speak, teach, and live out these truths in public life without fear of lawsuits or government censorship.

In recent years, there have been efforts to add sexual orientation and gender identity as protected classifications in the law—either legislatively or through executive action. These unnecessary proposals, often referred to as SOGI policies, threaten basic freedoms of religion, conscience, speech, and association; violate privacy rights; and expose citizens to significant legal and financial liability for practicing their beliefs in the public square. In recent years, we have seen in particular how these laws are used by the government in an attempt to compel citizens to sacrifice their deepest convictions on marriage and what it means to be male and female—people who serve everyone, regardless of sexual orientation or gender identity, but who cannot promote messages, engage in expression, or participate in events that contradict their beliefs or their organization’s guiding values.

Creative professionals, wedding chapels, non-profit organizations, ministries serving the needy, adoption agencies, businesses, schools, religious colleges, and even churches have faced threats and legal action under such laws for declining to participate in a same-sex wedding ceremony; for maintaining policies consistent with their guiding principles; and for seeking to protect privacy by ensuring persons of the opposite sex do not share showers, locker rooms, restrooms, and other intimate facilities. Under SOGI laws, people of good will can face personal and professional ruin, fines, and even jail time, and organizations face the loss of accreditation, licensing, grants, contracts, and tax-exemption.

SOGI laws empower the government to use the force of law to silence or punish Americans who seek to exercise their God-given liberty to peacefully live and work consistent with their convictions. They also create special preference in law for categories based on morally significant choices that profoundly affect human relations and treat reasonable religious and philosophical beliefs as discriminatory. We therefore believe that proposed SOGI laws, including those narrowly crafted, threaten fundamental freedoms, and any ostensible protections for religious liberty appended to such laws are inherently inadequate and unstable.

SOGI laws in all these forms, at the federal, state, and local levels, should be rejected. We join together in signing this letter because of the serious threat that SOGI laws pose to fundamental freedoms guaranteed to every person.

America has stood as a beacon of liberty to the world because our Constitution protects people’s freedom to peacefully—and publicly—work and live according to their convictions. We represent diverse efforts to contribute to the flourishing of our neighbors, communities, nation, and world. We remain committed to preserving in law and stewarding in action the foundational freedoms that make possible service of the common good, social harmony, and the flourishing of all.

You can stand with these leaders by adding your signature to “Preserve Freedom, Reject Coercion.” To do so, click here. 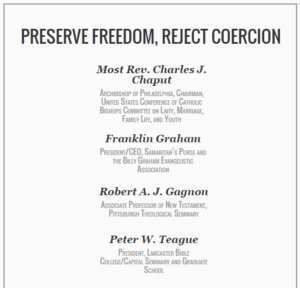 Some of the signers of the “Preserve Freedom Reject Coercion” letter.